Sections in the government say that the exchange facility is being misused by some to exchange their black money. 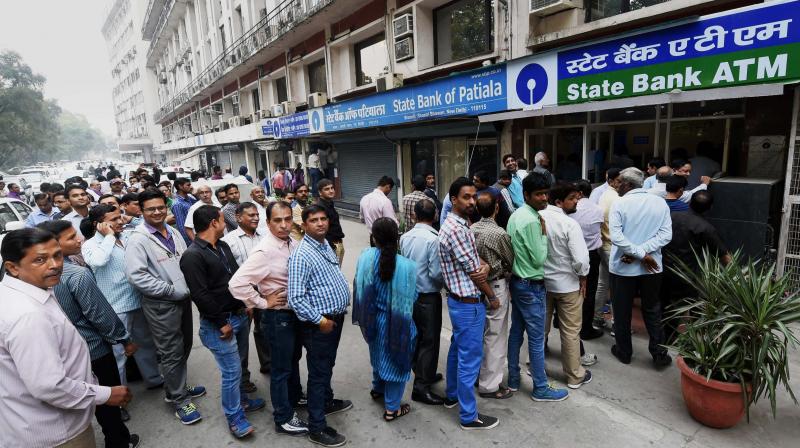 People queue up outside an ATM to withdraw money at Shastri Bhavan in New Delhi. (Photo: PTI)

New Delhi: On the 10th day since demonetisation was announced by the Prime Minister, the country continued to be on the edge. The daily changes in rules and new announcements relating to demonetisation are adding to the confusion and frustration.

Speculation was rife on Friday that the banking sector is not being able to keep pace with the government’s fresh announcements, most of which are being made late in the evening.

On Friday, at around 8 pm, the Indian Banks’ Association (IBA) announced in Mumbai that on Saturday banks will exchange old Rs 500 and Rs 1,000 notes only for senior citizens. This, IBA said, is being done to enable banks to clear the backlog of day-to-day operational work.

Confusion prevailed on Friday following reports that the government was considering stopping exchange of old notes altogether. So far there’s no official word on this. But with banks likely to be closed on Sunday, the queues and chaos is only expected to grow at the beginning of next week.

During the day senior finance ministry officials told reporters that the government is considering withdrawing the exchange facility and instead ask holders of old currency notes to deposit them in their bank accounts. Some said that the government was looking at issuing an order to this effect by November 24-25.

“About 60 per cent of the liquidity that we wanted to maintain in the market post demonetisation has already been achieved. As and when the remaining is achieved, the exchange facility could be phased out,” a finance ministry official had said earlier in the day.

However, reports in the evening denied any such move, fearing it would create panic.

Sections in the government say that the exchange facility is being misused by some to exchange their black money. To stop this, the government introduced indelible ink mark on the right hand index finger of people who are getting notes exchanged. However, ink has reached only metro cities till now.

Finance ministry on Friday warned Jan Dhan account holders, housewives and artisans that they will be prosecuted under the I-T Act for allowing misuse of their bank accounts by depositing black money in old Rs 500/1,000 notes during the 50-day window till December 30.

“It was announced by the government earlier that small deposits made in the banks by artisans, workers, housewives would not be questioned by the income tax department in view of the fact that present exemption limit for income tax is Rs 2.5 lakh. There are reports that some people are using other people’s bank accounts to convert their black money into new denomination notes for which reward is also being given to the account holders,” a finance ministry official said. This activity is being reported in Jan Dhan accounts as they don’t require PAN cards.

“The person who allows his or her account to be misused for this purpose can be prosecuted for abetment under Income Tax Act,” the finance ministry said. It said that people are requested not to become partners in the crime of converting black money into white. “Unless all citizens of the country help the government in curbing black money, this mission of black money will not succeed,” said the ministry.

Meanwhile, the RBI said on Friday that the limit for cash withdrawal at point of sale has been made uniform at Rs 2,000 per day across all centres (Tier I to VI) for all merchant establishments.

Finance minister Arun Jaitley said that replacing 86 per cent of the currency in circulation with new notes could not have been executed in a better way.

“On the execution part, I don’t think this could have been better executed,” he said and added that replacing such a large currency without any social unrest and significant economic disruption was an “achievement”.

“When currency replacement takes place, initial inconvenience takes place, but there is not a single major incident in the country. It’s moving smoothly... The queues are getting smaller,” he said. “In the next one-two weeks, we have to make sure currency reaches rural areas because that is where it’s required. This is the largest currency exchange in the world probably in recent times,” added Mr Jaitley.

Meanwhile, Prime Minister Narendra Modi on Friday met the President to brief him about the measures being taken by the government to ease liquidity crunch. Mr Modi also met the officials of the finance ministry.

Nearly 700 petrol pumps across the country on Friday started dispensing cash through debit card swipe in a bid to ease the cash crunch.