India   All India  19 Oct 2022  New airbase near Indo-Pak border will be crucial for country's security: PM Modi
India, All India

New airbase near Indo-Pak border will be crucial for country's security: PM Modi

Speaking at the Defence Expo 2022 in Gandhinagar, PM said that defence forces will release a list of 101 more items that cannot be imported 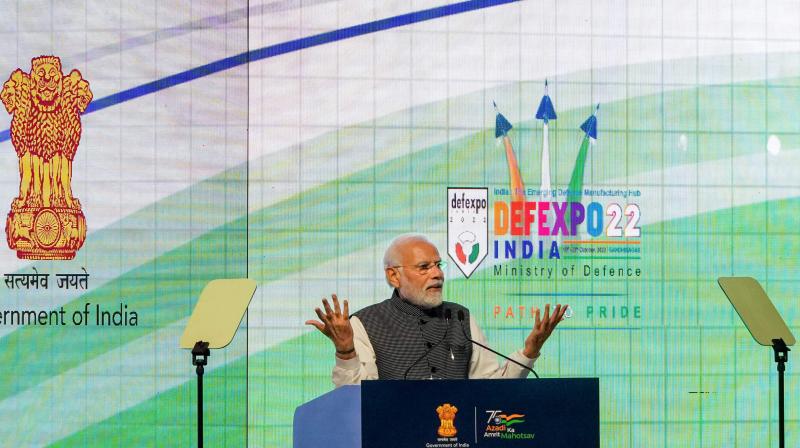 Gandhinagar: Prime Minister Narendra Modi on Wednesday laid the foundation stone of a new forward Deesa airbase in north Gujarat near the India-Pakistan border and asserted that now India is better prepared to respond to any misadventure on the western borders.

After inaugurating the DefExpo 2022 in Gandhinagar, Mr Modi released the fourth negative list under which, starting December, imports of 101 defence items, including next generation frigates, bullet proof security vehicles for the air force, mine countermeasure vessels, and automatic missile detection radar for ships, among others, will be progressively barred.

After the release of the fourth negative list, there are now 411 defence equipments, which can only be bought under the “Make in India” category.

Mr Modi also launched “Mission DefSpace” to develop innovative solutions for the armed forces in the space domain through industry and start-ups.

Talking about the air base coming up at Deesa in Banaskantha, he said it will “emerge as an effective centre for the security of the country.”

At the DefExpo’s India Pavilion, the Prime Minister unveiled the HTT-40, the indigenous trainer aircraft designed by Hindustan Aeronautics Limited. Mr n Turn to Modi said the decision of the Indian defence forces to buy a majority of the equipment made in the country shows the capacity of the “Atmanirbhar Bharat” (self-reliant India). He said India has made its place in the world despite the monopoly of a few manufacturing companies in the defence sector globally.

In the defence sector, the Prime Minister said, new India is moving ahead with the mantra of intent, innovation and implementation. Till 8 years ago, India was recognised as the world’s largest defence importer. But the new India showed intent, showed willpower and Make in India is becoming a success story in the defence sector today.

“The country has come a long way. Earlier we used to release pigeons and now we release cheetahs,” he said.

Underlining the uniqueness of DefExpo 2022, the Prime Minister said, “This is the first defence expo where only Indian companies are participating and it features only Made in India equipment.”

The Prime Minister said that it provides a glimpse of the capability and possibility of India in one single frame. He further informed that more than 400 MoUs are being signed for the first time ever.