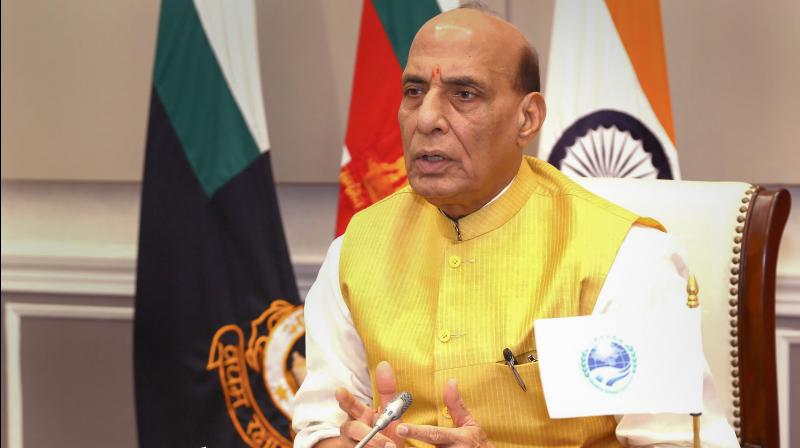 Addressing the naval commanders, defence minister Rajnath Singh said the Indian Navy’s role in ensuring maintenance of peace and stability in the region was going to increase manifold in the years to come. (PTI)

New Delhi: With the Indo-Pacific region emerging as the new centre of international diplomacy and military alliances, top Indian Navy commanders kicked off their five-day conference on Monday to brainstorm on the maritime challenges facing the nation.

Addressing the naval commanders, defence minister Rajnath Singh said the Indian Navy’s role in ensuring maintenance of peace and stability in the region was going to increase manifold in the years to come. He said New Delhi will ensure that a rules-based order, freedom of navigation and free trade will prevail in the Indian Ocean Region, with the interests of all participating countries protected.

“Being an important country in this maritime route, the role of our Navy becomes more important in ensuring the security of this region,” said Mr Singh.

Speaking about rapidly changing economic and political relations across the world, the defence minister said these economic interests do cause some stress in relations. “Therefore, there is a greater need to maintain peace and stability within the Indian maritime zones in order to boost trade and economic activities,” he said. “Only those nations have been successful in gaining dominance across the world whose navies have been strong,” said Mr Singh. He said the Indian Navy was playing a key role in “our maritime and national security”.

The conference is being held when the Malabar naval exercises involving the Quad countries -- India, the US, Japan and Australia – just ended in the Bay of Bengal, which was aimed at keeping the Indo-Pacific region free from Chinese interference. The US Navy, along with Britain’s Royal Navy and the Royal Australian Navy, have increased their presence in the Indo-Pacific to challenge the growing influence of the Chinese PLA Navy, which is expanding rapidly in the region.

The Naval Commanders’ Conference from October 18 to 22 is attended by all operational and area commanders of the Navy. “The conference will focus on addressing contemporary security paradigms while seeking ways to enhance combat capability of the Navy and make operations more effective and efficient,” said Indian Navy spokesman Commander Vivek Madhwal. He said there will be a detailed review of performance of weapons, readiness of the Navy’s platforms and ongoing naval projects, with a focus on ways to enhance indigenisation through “Make in India”. The conference will also dwell upon the dynamics of the geostrategic situation of the region in the backdrop of recent events, he said.

The Chief of Defence Staff, and the Chiefs of the Indian Army and Indian Air Force will also interact with the naval commanders to address issues regarding the convergence of the three services with respect to the operational environment, and on avenues for augmenting tri-service synergies.