The company insisted that it is not a Diwali collection, which will be soon launched under 'Jhilmil si Diwali' promo 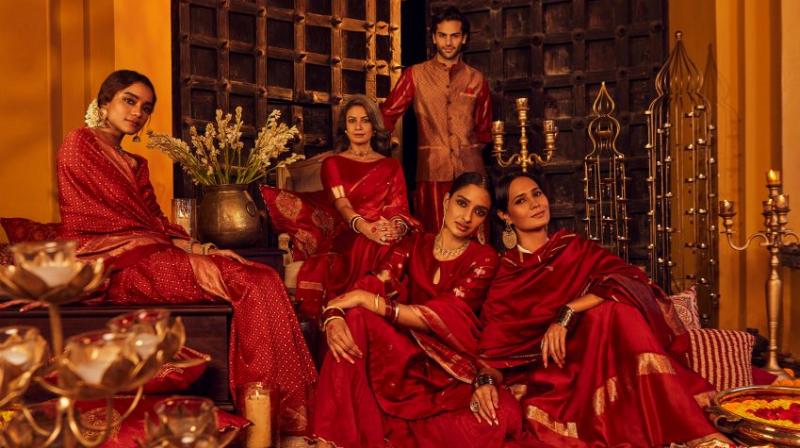 FabIndia was trolled on social media for what some said was unnecessarily uplifting secularism and Muslim ideologies. (Photo: Twitter/@FabindiaNews)

New Delhi: Clothing brand FabIndia has removed a promotional capsule about its new festive line after a backlash from right-wing groups.

While the brand was accused of "defacing" the Hindu festival of Diwali by naming its festive collection as Jashn-e-Riwaaz (celebration of tradition), the company insisted that it is not a Diwali collection, which will be soon launched under 'Jhilmil si Diwali' promo.

FabIndia was trolled on social media for what some said was unnecessarily uplifting secularism and Muslim ideologies in a Hindu festival, saying it hurt their religious sentiments.

After it put on Twitter the Jashn-e-Riwaaz collection on October 9, some social media users called for a boycott of the brand, making their campaign one of the top trends.

"We at FabIndia have always stood for the celebration of India with its myriad traditions in all hues," a company spokesperson said. "Our current capsule of products under the name Jashn-e-Riwaaz is a celebration of Indian traditions. The phrase means that, literally. The capsule is not our Diwali Collection of products. Our Diwali collection is called 'Jhilmil si Diwali' is yet to be launched."

Jashn-e-Riwaaz is a phrase in Urdu, a language that was born in India.

The tweet, which went viral on Monday, said: "As we welcome the festival of love and light, Jashn-e-Riwaaz by Fabindia is a collection that beautifully pays homage to Indian culture".

This was deleted after the backlash.

BJP Yuva Morcha President Tejasvi Surya was among those who slammed the ad in a post on Twitter. "Deepavali is not Jash-e-Riwaaz. This deliberate attempt of abrahamisation of Hindu festivals, depicting models without traditional Hindu attires, must be called out. And brands like @fabindiaNews must face economic cost for such deliberate misadventures," he said on Monday afternoon.

"Wow @FabindiaNews great job at de-Hinduising Deepawali! Call it a 'festival of love and light', title the collection 'Jashn-e-Riwaaz', take Bindis off foreheads of models but expect Hindus to buy your overpriced, mass-produced products in the name of 'homage to Indian culture'!" she tweeted.

Soon hashtag #BoycottFabindia began trending. FabIndia did not say why it removed the tweet.

The ethnic retail behemoth is not the first brand to face right-wing attacks and buckle under pressure.

Tata Group's jewellery brand Tanishq was forced to withdraw an advertisement that showed an interfaith couple at a baby shower organised for the Hindu bride by her Muslim in-laws.

It withdrew the advertisement after trolling soon spread to physical threats to company employees and stores.

Clothing brand Manyavar too was at the receiving end when its advertisement featuring Bollywood actor Alia Bhatt in wedding attire, appeared to question an old tradition.

Established in 1960, FabIndia sources its products from villages helping to provide and sustain rural employment in India.

According to reports, the products are currently produced by over 40,000 artisans and craftspeople across India.

In 2019, a Holi ad by Surf Excel had received similar flak by certain groups, as it showed children of two different religions celebrating the festival of colours.