UP Police said sweet box found at site of incident proved to be vital clue as Gujarat address led the police to state. 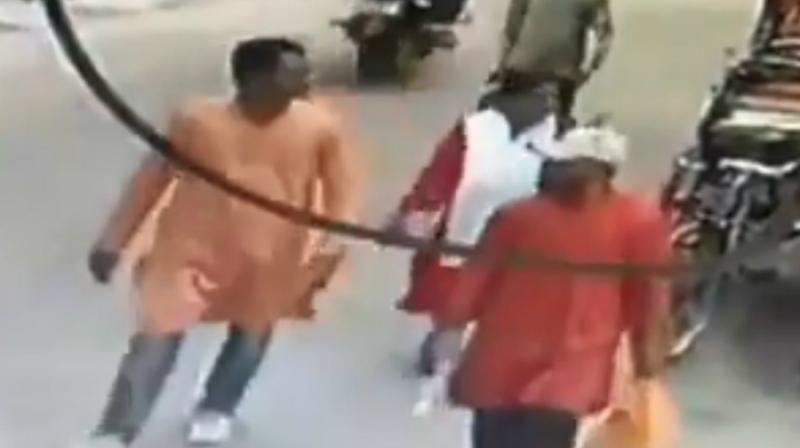 According to CCTV footage, two men and a woman were seen going towards Tiwari’s residence. (Photo: Screengrab)

Lucknow: The Uttar Pradesh police on Saturday claimed to have cracked the murder case of 52-year-old Hindu leader Kamlesh Tiwari with arrest of three people from Gujarat.

Addressing a press conference, UP DGP OP Singh said the sweet box found at the site of the incident proved to be a vital clue as the Gujarat address led the police to the state.

“Three people have been arrested and are being interrogated. According to the initial findings, they were involved in the murder conspiracy. There are a few more people from Lucknow who are involved in the crime and attempts are on to arrest them,” Singh added.

Giving details about the suspected killers, Singh said, “The names of three people are Maulana Mohsin Sheikh, Faizan, and Khurshid Ahmed Pathan. Two other accused were also detained but released later, they are being monitored.”

According to CCTV footage, two men and a woman were seen going towards Tiwari’s residence. The police said Tiwari was already provided security and one of the guards stationed outside his house had allowed the accused inside after receiving confirmation from the leader.

The police’s initial investigation into the murder hinted that the two attackers had links with Gujarat, as they had brought weapons in a box of a famous sweet shop of Surat. A pistol, which was recovered from the crime spot, and a knife used to slit the victim’s throat were in the same box, suggested the police probe.

In 2015, Tiwari made headlines when he gave derogatory remarks against Prophet Mohammad. Following widespread protests, the state government had slapped provisions of National Security Act (NSA) on him which was later on revoked by the Allahabad High Court.