After reaching Sabarimala temple, the women have to climb 18 steps to the sanctum sanctorum, and walk into history. 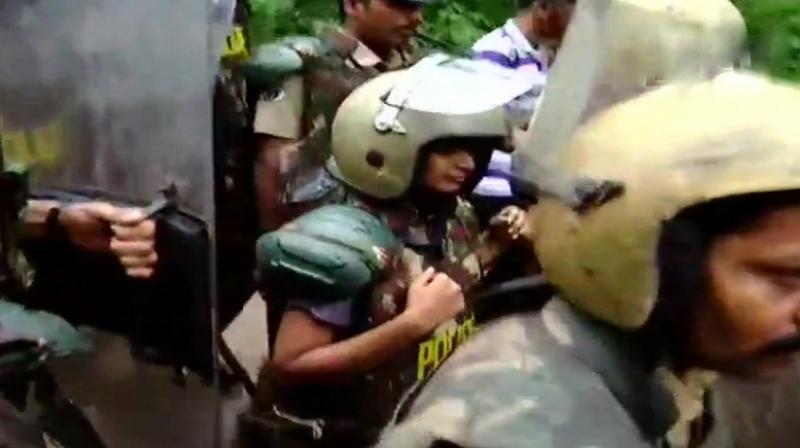 Pamba (Kerala): Two women, including journalist Kavitha Jakkal of Hyderabad based Mojo TV, on Friday have started walking towards the Sabarimala temple with tight police escort amid strong protests by devotees opposing entry of women of menstrual age into the Lord Ayyappa temple in Kerala.

The other woman, a Kochi resident, in black clothes and carrying the Irumudikkettu, traditional prayer kit offered to Lord Ayyappa, is walking separately with heavy police escort.

After reaching the shrine, they have to climb 18 steps or Pathinetaa Padi at the temple, and will create history by becoming the first women of menstruating age to enter the Sabarimala temple of Lord Ayyappa after the Supreme Court order permitting women of all age groups to enter the shrine.

Both the women started the 4.6-km trek from the base camp Pamba. Senior police officer IG Sreejith is leading the police teams that are escorting the two women. The police said they will ensure safe passage to the women all the way to the temple.

Police led by IG S Sreejith have thrown a security ring around the women who had requested security to go to Sabarimala Sannidhanam.

Today is the third day since the temple opened after the Supreme Court’s historic verdict on September 28 that lifted the centuries-old ban on women between 10 to 50 years from entering the Sabarimala temple.

Not a single woman between 10 to 50 years has managed to enter the temple since it opened on Wednesday (October 17).

The attempt by the two women of Friday to reach the shrine came a day after a New Delhi-based woman reporter of a foreign media outlet made a failed bid to visit the temple.

There have been strong protests by devotees opposing the entry of girls and women of menstrual age into the Lord Ayyappa temple.

On Thursday, the New Delhi-based woman journalist was stopped mid-way by devotees opposing the entry of women of menstrual age into the hill shrine. The journalist accompanied by her male colleague, a foreigner, descended the hills from Marakkoottam area in the face of mounting protests. A case has been registered against devotees who allegedly prevented her trekking and forced her to climb down the hills.

Protests by devotees for the last two days to block women of menstruating age from entering the temple have led to violence at the base camps. Reporters were attacked, their vehicles damaged, and women who started to trek to the temple were forced to turn back with threats and intimidation.

Kerala Chief Minister Pinarayi Vijayan has said no one would be allowed to stop women devotees of menstruating age from going to Sabarimala.