Satyarthi was concerned over incidents where those responsible for child protection were found guilty of raping killing and selling them. 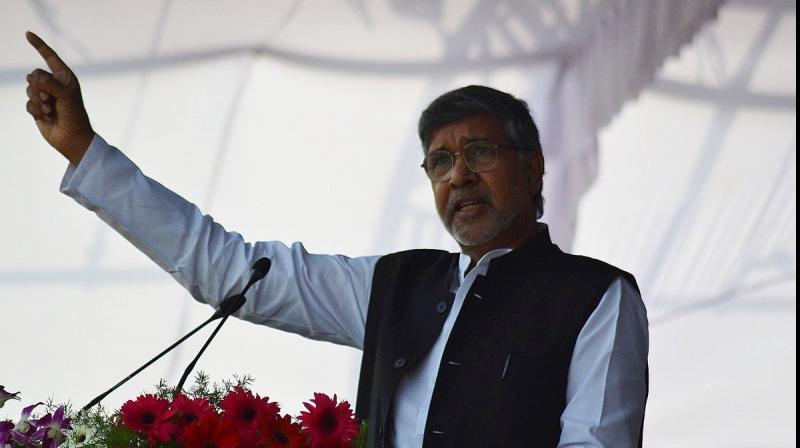 Kailash Satyarthi, speaking as chief guest at RSS's annual Vijayadashmi celebrations in Nagpur, said India may be a land of hundred problems, but it is also mother of over billion solutions. (Photo: Twitter | @RSSorg)

Nagpur: Nobel laureate Kailash Satyarthi suggested on Thursday that RSS shakhas, situated in almost all of India's villages, could serve as a firewall to protect children, especially girls.

Stressing that women today were grappling with fear, threat and insecurity at home, at workplace and in other public areas, Satyarthi said it was a "grave disrespect towards Bharat Mata".

Satyarthi, speaking as the chief guest at RSS's annual Vijayadashmi celebrations at its headquarters in Nagpur, said India may be a land of hundred problems, but it is also the mother of over a billion solutions.

"In order to achieve the goal of building a great and child-friendly nation, participation and leadership of conscientious youth is necessary," he said.

"I request the youth from the RSS to take a lead on this path for saving the present and the future of our motherland. If the branches of the Sangh situated in almost all the villages of the country serve as a firewall to protect this generation of children, then all generations to come will become self-sufficient in protecting themselves," he added.

The 64-year-old child rights activist won the Nobel peace prize in 2014 for his Gandhian way of struggle against the exploitation of children for financial gain.

Satyarthi expressed concern over the incidents where those responsible for protecting children, especially girls, were found guilty of raping, killing and selling them.

Girls stop attending school fearing harassment and eve-teasing and "we, out of fear remain quiet seeing all of this happening right in front of our eyes," he said.

"With utmost humility and reverence for my motherland, I am offering a panchamrit - the five-element concoction - at her feet. In this panchamrit, I clearly see the potential of building a compassionate, inclusive, safe and secure, self-reliant and self-respecting India," he said.

"No respectable society can be built without compassion. Compassionless politics, economy and society are much like a body without the soul... There is no other country as diverse as India. Inclusivity is our soul. Without inclusivity, unity in diversity cannot be imagined.

"Without security, environment of mutual trust and respect in the society, nation building is unimaginable. Internal security is equally, if not more, important than safeguarding our sovereign frontiers," he said.

The Nobel peace prize winner also called for different parameters to measure the development of a nation, instead of indicators like per capita income or GDP.

"The development indicators for economists may vary from per capita income to GDP, but for me this scale is very different.

"I measure the development of the society by a smile that we can bring on the face of an adivasi (tribal) daughter enslaved at a farm in a far flung village or in a stone quarry reeling under constant threat, fear, insecurity and uncertainty," he said.

Satyarthi said the evil of child labour and slavery was rampant across the world, but there was absolutely no action or intervention against it.

"It is only the inherent spiritual power of my motherland that inspired an ordinary person like me to run a worldwide movement to save childhoods from being ruined. Over the last 20 years, the number of child labourers globally has fallen from 260 million to around 150 million.

"I feel heart-wrenched that even the day and age we live in, our daughters are still sold and brought at a price much less than what cattle commands," he said.

"People ask me how tender childhoods can be saved in India amidst so many drawbacks and problems. My reply invariably remains that India may be a land of hundred problems, but it is also the mother of over a billion solutions," he said.

"I have been incessantly demanding a strong legislation against this crime. In fact, last month during the United Nations General Assembly, I met with several heads of countries and have already started working on an international treaty against online child pornography," he said.