'While we were waiting, tantri informed that if we attempt to take women ahead they would close temple,' IG Sreejith said. 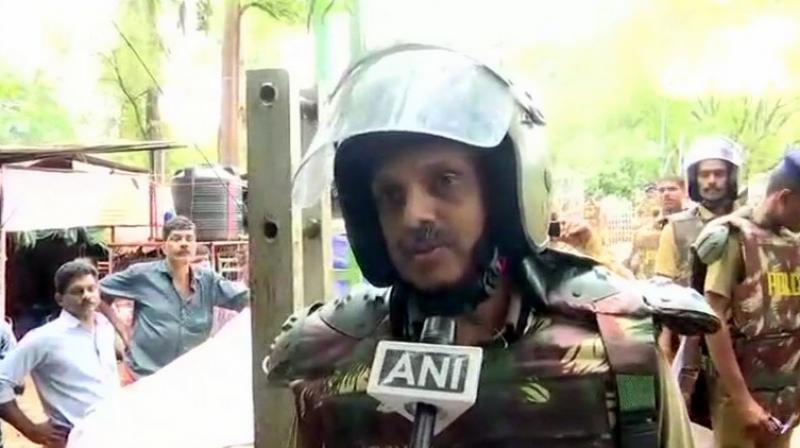 'I am also an Ayyappa devotee,' IG S Sreejith said while negotiating for the two women. (Photo: Twitter | ANI)

Kochi: History remains to be made after the two women, just minutes away from the last 18 steps to the Sabarimala temple, had to turn back as scores of protesters stood before policemen determined to stop them from entering the shrine.

Around 300 policemen had escorted the women on a 5-km trek to the renowned hilltop shrine of Lord Ayyappa. The temple opened its doors for the first time since the Supreme Court lifted ban on entry of women of menstruating age (between 10 and 50 years) on October 17.

The police team that escorted the two women was headed by Inspector General (IG) S Sreejith. "I am not going back on the stance. I am doing everything that the law says," NDTV quoted IG S Sreejith as saying.

"Those women have the right to be here. I am not going back without taking them to the shrine. It is a temple, kindly stay calm," IG Sreejith appealed to the devotees, requesting them to follow the Supreme Court's verdict and allow him to complete his duty.

"I am also an Ayyappa devotee," the IG added, while negotiating for the women.

After the women were turned back meters ahead from the shrine, IG Sreejith said, “We had brought them (2 women) till temple premises but tantri and priest refused to open temple for them. While we were waiting, tantri informed me that if we attempt to take the women ahead they would close the temple,” IG Sreejith said.

He further said, “It's a ritualistic disaster. We took them up to temple and gave them protection but 'darshan' is something which can be done with consent of priest.”

The two women, journalist Kavitha Jakkal of Hyderabad based MoJo TV and devotee, women activist Rehana Fatema, were about 500 metres from the holy steps, surrounded by a sea of security with policemen in riot gear, as the standoff refused to end.

As devotees blocked them women from heading towards the shrine, a group of temple priests sat on the steps of the temple in protest, chanting and clapping.

The top police officer was unable to take the women to the shrine. The women agreed to return, as the protests escalated and Sabarimala priests threatened to stop prayers and shut down the temple.

"If the women enter the temple then we will be forced to shut the temple. I will walkout with the keys," Sabarimala temple head priest Kandararu Rajeevaru told media.