'This is agenda-driven. This is not a place for sex tourism. This is abode of Lord Ayappa,' Prayar Gopalkrishnan said. 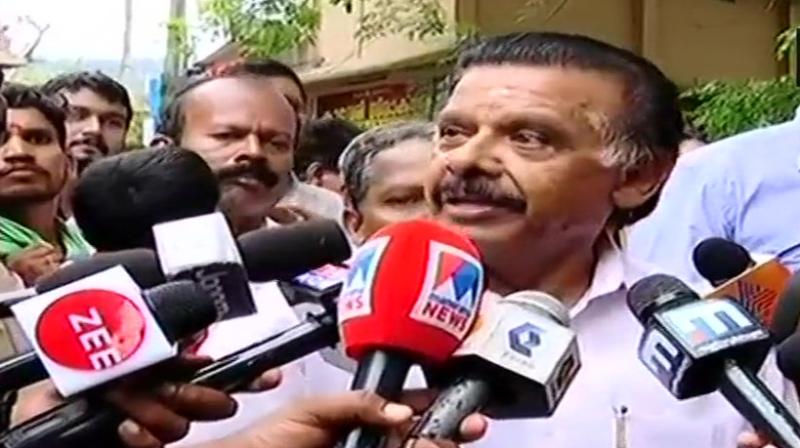 This is not the first time that ex-TDB president Prayar Gopalkrishnan made such misogynistic statement. (Photo: Twitter | ANI)

Thiruvananthapuram: In clear defiance of the Supreme Court verdict, anti-women protesters, under the guise of devotees, did not allow any woman in the banned age group to reach the holy shrine on the third consecutive day of the opening of Sabarimala temple.

In a statement that is likely to boost the morale of the fierce protesters, former Travancore Devaswom Board (TDB) chief Prayar Gopalkrishnan on Friday said that allowing women inside the temple will turn the Lord Ayappa’s shrine into a spot for “sex tourism”.

“This is agenda-driven. Police is also involved in it... This is not a place for sex tourism. This is the abode of Lord Ayappa,” Prayar Gopalkrishnan was quoted as saying by news agency ANI.

This is not the first time that the ex-TDB president made the misogynistic statement.

Last year, after the Supreme Court referred the contentious issue to a constitution bench, Gopalkrishnan had said that letting women inside the shrine will lead to “immoral activities” and transform the place into a “spot for sex tourism like Thailand”.

Women between the age of 10 and 50 – when they are most likely to be in the menstrual age – were banned from the Sabarimala temple. However, the apex court on September 28 lifted the centuries-old ban.

Since the opening of the temple on October 17 following the historic top court’s verdict, several women have tried to visit the shrine. However, no woman has yet been able to visit the Lord Ayyappa shrine as protesters are blocking them from taking the 4.7 km walk from Pamba.

Today, two women, a journalist and an activist, who had covered a 5 km trek uphill and were minutes away from the 18 steps that lead to the sanctum sanctorum of the shrine, were forced to return.

Also Read: My life is in danger: Women activist, after being turned back from Sabarimala

Another woman also started her climb only to be told by the police that she had to make her way to the shrine on her own, reports said.

Sabarimala priests have also threatened to lock the temple if women aged between 10 and 50 entered Lord Ayappa’s abode.