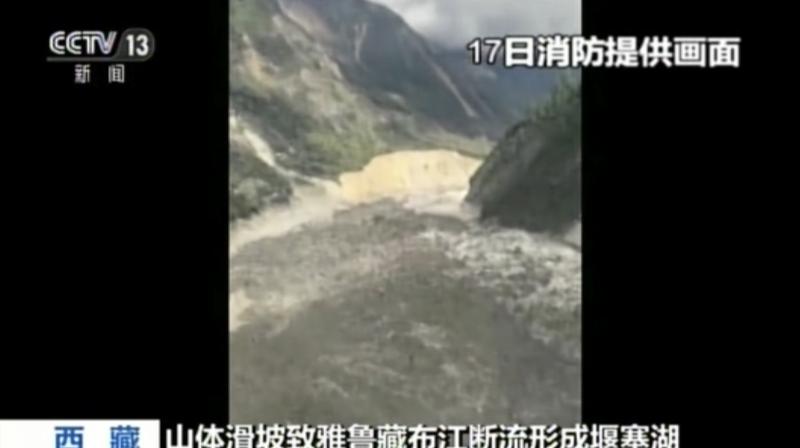 This image shows a landslide and barrier lake on Yarlung Tsangpo in Tibet in western China. (CCTV via AP Video)

Beijing/New Delhi: Chinese emergency services said on Thursday that about 6,000 people were evacuated after a landslide in Tibet blocked the flow of one of the region's key rivers, creating a lake that could endanger downstream areas in India.

The collapse on Wednesday morning of a cliff in the deep valley through which the river flows created a dam-like barrier on the Yarlung Tsangpo, the headwater of India's Brahmaputra River, the local emergency response bureau said in a report carried by state media.

The landslide struck near a village in Menling County and water in the lake had risen to a height of 40 meters (130 feet) by Thursday, the bureau said.

No deaths or injuries were reported and the bureau said China has been keeping India updated on the blockage.

Authorities in northeastern India issued an alert, warning villagers in the East Siang district of Arunachal Pradesh, the state bordering China's Tibet region, not to venture near the river.

District magistrate Tamiyo Tatak said water levels in the river had fallen drastically and once the blockage was cleared in China, water might suddenly rush downstream, causing a disaster in India.

In June 2000, a sudden high discharge of water from the Yarlung Tsangbo caused extensive damage in Arunachal Pradesh and other downstream areas in India.

With its towering peaks and glaciers, Tibet is the source of numerous Asian rivers, adding to China's strategic influence over its southern neighbors.

Fast-rising temperatures have caused those glaciers to melt at an increasing pace, throwing a shadow over future water resources for China and other Asian nations.