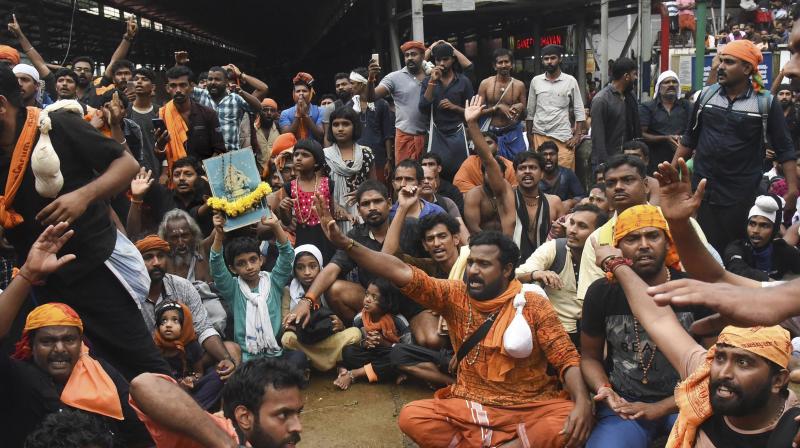 The advisory also referred to campaigns of certain civil and women's rights activists, Left parties and fronts and pro-Left wing extremism groups in favour of women's entry and actively using women to do so. (Photo: PTI)

New Delhi: The Centre has asked the southern states of Kerala, Tamil Nadu and Karnataka to tighten security in view of the continuing protests against the Supreme Court order allowing entry of women of all age groups to Sabarimala temple.

In an advisory, the Union Home Ministry also asked the three states to closely monitor the dissemination of various "adverse" messages through social media and the Internet services.

"All necessary precautionary measures may be taken to maintain law and order and appropriate security arrangements may be made to prevent any untoward incident," the advisory, sent by the internal security division of the home ministry, said.

The advisory said appropriate prohibitory orders be issued and a close watch may be kept on dissemination of "adverse information" through social media and internet services, to ensure that no breach of law and order takes place.

It also referred to campaigns of certain civil and women's rights activists, Left parties and fronts and pro-Left wing extremism groups in favour of women's entry into the shrine and actively using women to do so.

While opposing groups and activists have threatened that they would not allow entry of women inside the shrine, Hindu outfits plan to organise protest programmes against apex court order, it said.

"Separately, Ayyappa devotees, Hindu outfits and certain caste-based outfits have been organising a state-wide protest against the Supreme Court order. Participation in these protests has ranged from 50-3000, including participation of a sizeable number of women.”

"Hindu outfits have also organised a few protest programme in neighbouring states of Tamil Nadu and Karnataka," the advisory said.

The Supreme Court has recently allowed women of the menstrual age group to visit Sabarimala Temple of Lord Ayyappa leading to the protests.

Two women reached the hilltop on Friday but had to return before reaching the sanctum sanctorum following massive protests by Lord Ayyappa devotees.

A large number of devotees blocked the young women and police team escorting them at Valiya Nadappandhal, the queue complex located a few metres away from the holy 'pathinettam padi' (the 18 sacred steps), leading to the sanctum sanctorum.