With little money on him, he carried his daughter's body on his shoulder for 4 km to an auto-rickshaw stand at Phulwari Sharif in Patna. 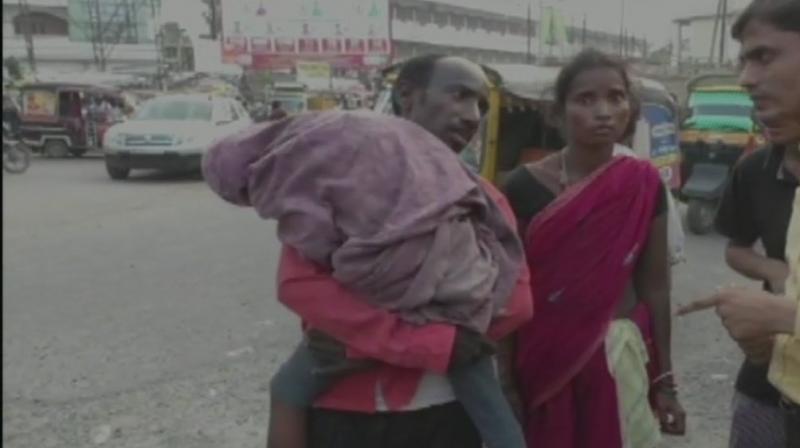 The man, who hailed from a poor family, also alleged that he lost his child as the hospital staff refused to attend to the ailing girl. (Photo: ANI)

Patna: In another horrific incident, a father of a 9-year-old girl who died at the All India Institute of Medical Sciences (AIIMS) in Patna on Tuesday was forced to ferry the body of her dead daughter due to unavailability of ambulance.

With little money on him, he carried his daughter's body on his shoulder for nearly four km to an auto-rickshaw stand at Phulwari Sharif in Patna.

The man, who hailed from a poor family, also alleged that he lost his child as the hospital staff refused to attend to the ailing girl.

Raushan Kumari, suffering from high fever for six days, died allegedly near the Outdoor Patient Department (OPD) of the hospital.

According to reports, the father of the girl Rambalak and his wife, residents of Kajra village in Lakhisarai district, brought their daughter to AIIMS, following which they were directed by the staff to get a registration card made at the OPD counter.

The girl's condition started to deteriorate as her father waited in the queue to get the card.

Rambalak pleaded with people in the queue to allow him to get the formalities completed out of turn but it fell on deaf ears.

The helpless father then pleaded the clerk deployed at the counter, but was asked to come in queue.

The hospital denied the claim made by the man. AIIMS Director Dr Prabhat K Singh said, "I am unable to understand what has happened. In fact nobody there came to know about it, how is it possible?"

Dr Singh has cast aspersions on the aggrieved father saying "I doubt how the girl died. I wonder that if the man left after seeing the long queues in the hospital resulting in the death of the child."

With inputs from agencies