India   All India  19 Sep 2018  Crime to take law into own hands: Mohan Bhagwat on cow vigilantism
India, All India

Crime to take law into own hands: Mohan Bhagwat on cow vigilantism

The Sangh head said, 'We have to reject the double-speak as there is no talk of violence by cow smugglers.' 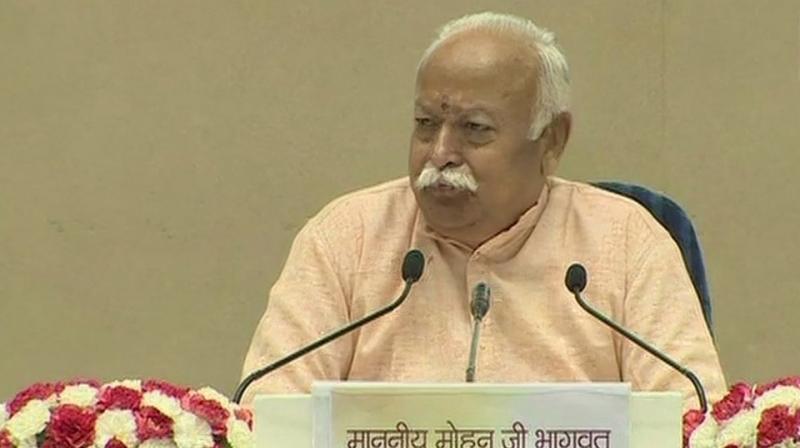 The question came in the backdrop of instances of alleged lynching by cow vigilantes in several states. (Photo: ANI | Twitter)

New Delhi: RSS chief Mohan Bhagwat Wedneday pitched for a policy to maintain demographic balance in the country, saying it should cover all sections of the society, beginning with those having more children but "limited" means for their upbringing.

Bhagwat presented Sangh's views on a number of contentious issue while answering wide-ranging written questions on the last day of the RSS' three-day conclave, including on matters like inter-caste marriages, education policy, crimes against women, cow vigilantism.

Bhagwat also strongly backed existing quota for different communities, but said there should not be any politics on the issue. He claimed there is an increasing acceptance of Hindutva, his organisation's founding ideology, in the world but anger existed against it in India due to various wrong practices which have crept in over the years. The Sangh is working to remove them, he added.

To a question about changing demographic balance in parts of India and the 'declining' Hindu population, the RSS chief said the matter of demographic balance is considered significant world over and it should be maintained here also. "Keeping this in mind, a policy on population should be prepared," he said, adding that it should keep in mind the country's projected population in the next 50 years and its resources to deal with the number.

Once a policy is decided, it should be applied on everyone, not sparing anyone, he said, drawing a bid round of applause from the packed auditorium. He added that such a policy should be applied first where the problem (of population) exists, "where there are more babies but means to bring them up are limited... If their upbringing is not good, then they will not become good citizens." Such a policy can be introduced later among those where such a problem is not there, he said, adding only law is a not a solution to the issue.

Many BJP leaders and Hindu outfits have been raising the issue of what they call a dwindling Hindu population against increasing Muslim numbers. Speaking against religious conversion, Bhagwat said it is almost always done with ulterior motives and also causes demographic imbalance.

He also pitched for protection of cows but disapproved of going against law in the name of cow vigilantism.

The RSS chief said it is a crime to take law in one's own hands and there should be stringent punishment in such cases, but added, "we have to reject the double-speak as there is no talk of violence by cow smugglers". He was asked about increasing cases of mob lynching and cow vigilantism in the country.

The three-day event saw presence of several leaders of the ruling BJP, as also of Bollywood actors, artists and academicians. However, almost all major opposition parties gave the conclave 'Bhavishya Ka Bharat -- An RSS Perspective' a miss though the RSS had said it had invited them. On Sangh's view on the issue of inter-caste marriages, Bhagwat said it supports such weddings and if there is a census on inter-caste marriages, the maximum cases will be those from the Sangh.

Expressing anguish over crime against women, he said an environment needs to be created where women feel safe and secure. Replying to another question, he also said that it was responsibility of the government and administration to protect its people against any discrimination.

Among other issues, Bhagwat also talked about the situation in Jammu and Kashmir and said the RSS does not accept Article 370 and 35-A of Constitution relating to the state. While Article 370 deals with autonomy of the state, Article 35-A allows the state assembly to define permanent residents of the state.