The apprehension of the petitioner about mass shortage is wholly misplaced, unjustified and unwarranted. 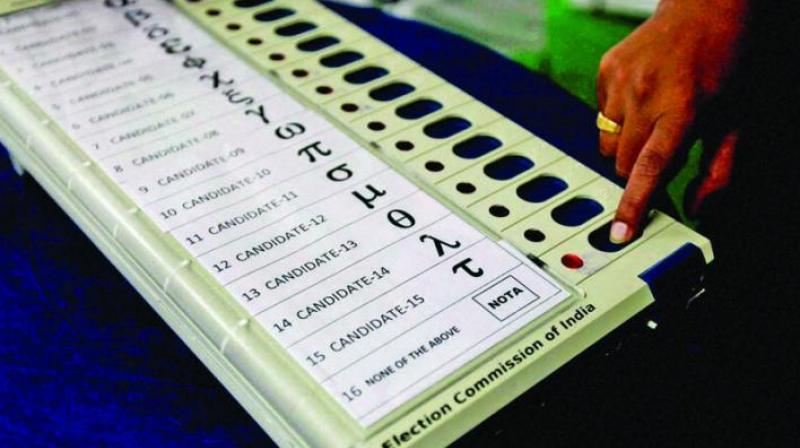 The two leaders and their party “cannot seek to instruct or direct the Election Commission of India to conduct elections in a particular manner. (Representational image)

The Commission gave this response to the petitions filed by Congress leaders Kamalnath for Madhya Pradesh and Sachin Pilot for Rajasthan, alleging large scale bogus or fake votes in the voters list for the two States going to polls in the next two months.

The EC said that the Writ Petitions filed by the two leaders ought to be dismissed with costs as the same is an abuse of the process of law, besides being misconceived and malafide, as the Petitioners are seeking to instruct/direct the Election Commission of India, which is a Constitutional Authority, to conduct elections according to their personal whims and fancies and that of the political party to which they stand affiliated. Opposing a petition filed by Congress leaders, EC asserted that it is a Constitutional body that has to function in accordance with the rules and laws and not in tandem with the “instructions” of a political party. It is not within the jurisdiction or domain of the petitioner and/or his party/organization to question the measures taken by the Election Commission with regard to the conduct of elections or preparation of voters’ lists.

The EC further said that the political party to which they stand affiliated couldn’t approach the Supreme Court time and again so as to re-agitate the same issue and interfere in the functioning of a Constitutional authority such as the Election Commission. The two leaders and their party “cannot seek to instruct or direct the Election Commission of India to conduct elections  in a particular manner.

The petitions are misconceived and malafide as they are seeking to instruct EC to conduct elections according to their personal whims and fancies and that of the political party to which they stands affiliated. The allegations against the Commission are blatantly incorrect, misleading and misconceived.

The EC cannot be compelled to accept all suggestions made by the Petitioners and the political party/organization to which they are affiliated. It further said that EC is mindful of its role and duties, and has accordingly already issued all requisite instructions to ensure procurement and safety of EVMs, printing of VVPATs, mock testing of machines, deployment of officials etc.

The apprehension of the petitioner about mass shortage is wholly misplaced, unjustified and unwarranted. The required number of EVMs had already reached the States of Madhya Pradesh, Rajasthan and Chattisgarh. The allegation that VVPAT machines malfunction by casting votes in favour of one particular party is utterly false and fictitious, and is strenuously denied.

It also submitted that these issues have already been deliberated upon by the apex court in a similar petition filed by another Congress leader from Gujarat and hence, there can be no justification by the party and its members to keep raking up the same issues before every assembly poll.

The fact that VVPATs have been successfully used with EVMs in states having diverse climatic conditions such as Meghalaya, Tripura, Nagaland, Kerala, Goa, Karnataka, Himachal Pradesh, Punjab, Uttarakhand and Jammu & Kashmir, etc. during the various general and bye-elections is a forceful testament to the robustness and reliability of the design, technical specifications and functional efficiency of the VVPATs in all elections. The ECI-EVMs do not have any radio frequency receiver or decoder for data for wireless or any external hardware port for connection to any other non-EVM accessory or device. Hence, no tampering is possible either through hardware port or through Wireless, Wi-Fi or Bluetooth device because the Control Unit accepts only encrypted and dynamically coded data from Ballot Unit.