He said that 'these people' will not release the money till they receive kickbacks. 'They are trying to fool us,' he added. 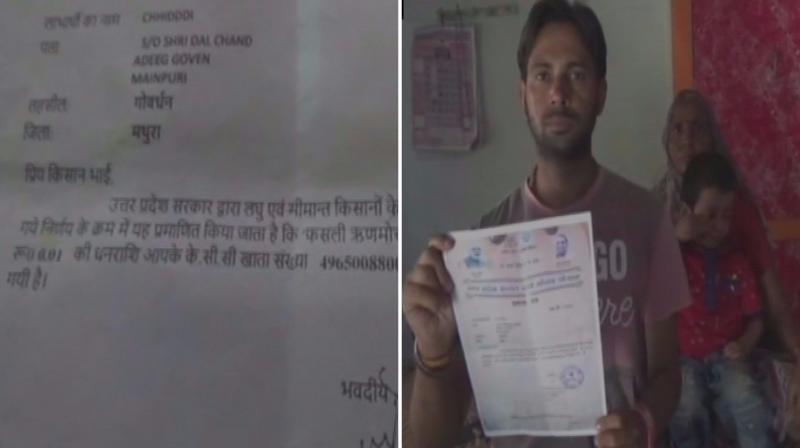 Chhiddi, a marginal farmer of the Govardhan Tehsil in the Mathura, said that the state government is making fun of the farmers. (Photo: ANI/Twitter)

Mathura: A farmer in Uttar Pradesh's Mathura has received a waiver of one paisa on Rs 1,55,000 loan amount, in the aftermath of the Yogi Adityanath-led Uttar Pradesh Government announcing waivers on loans up to Rs 1 lakh.

Chhiddi, a marginal farmer of the Govardhan Tehsil in the Mathura district said that the government has played a cruel joke on them and the entire loan amount should be waived.

He further said that the state government is making fun of the farmers and added that he doesn't know whether this 1 paisa waiver is a mistake by the bank or a reality.

Chhiddi's son Banwari Sharma accused the government and its officers of 'corruption'.

He said that "these people" will not release the money till they receive kickbacks. "They are trying to fool us," he added.

When asked about the incident, the Mathura District Megistrate (DM), Ravinder Kumar, said that such an error could be due to some "technical glitches" in the system.

"We have received information about Chhiddi's case. An enquiry will be made in this. Anyone found responsible will be held," Kumar added.

In a similar incident, farmers in the Etawah district received waivers worth 19 paisa and 50 paisa.

"The government waived only 19 paisa. I have spent a lot till now, have visited a number of officials, but it's sad that I have only received 19 paisa of relief," said a farmer Ishwar Dayal.

He said that the village is laughing at them, and that they don't know who is gaining, "but we are certainly not gaining anything."

"We are very sad with this. It would have been better had they not given anything," another farmer said.

Earlier, the Uttar Pradesh government had promised to waived off Rs. 30,729 crore worth loan amount of the small and marginal farmers of the state.

The decision was proposed to be benefit 2 crore 15 lakh farmers of the state.

Along with this, the government had also decided to forego Non-Performing Assets (NPA) worth Rs. 5,630 crore of 8,00,000 farmers.