The Indian Army, which participated in the competition for the first time, fielded a team selected and trained by Southern Command. 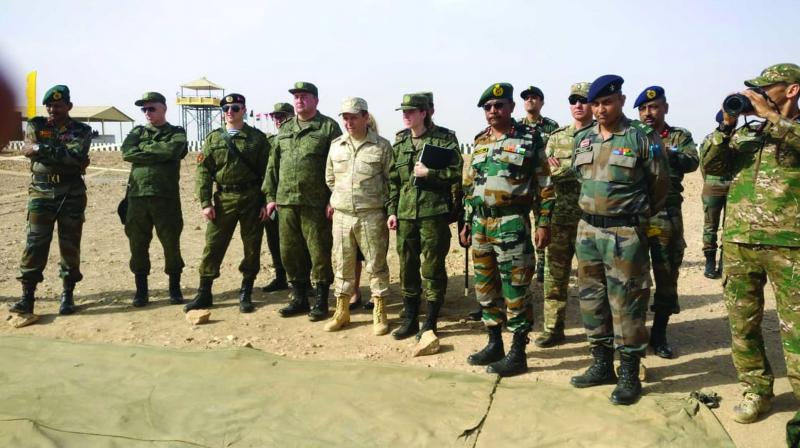 Preparations underway ahead of the event (Photo: PIB)

The Indian Army, which participated in the competition for the first time, fielded a team selected and trained by Southern Command. The team trained hard for the last 10 months in extreme weather and terrain conditions of the Thar Desert.

The International Army Games is a military sports event organised by the Russian ministry of defence. Begun since August 2015, it involves participation of the armies of about 32 countries which go through a number of competitions over two weeks to prove their mettle. Earlier this year, it was proposed that the International Army Games be held in 32 disciplines in 10 countries including Russia, India, China, Azerbaijan, Armenia, Belarus, Iran, Mongolia, Uzbekistan and Kazakhstan.

It was decided that a fifth Army International Games’ event, the Scout Masters Competition, was to be held in India for the first time, in 2019. The area selected was the dunes near Jaisalmer, nestled in the Great Indian Thar Desert. Eight countries which participated were Russia, Kazakhstan, Uzbekistan, Zimbabwe, Armenia, Belarus, China and India. The competition, scheduled from July 24 to August 17, 2019, was organised by Konark Corps, headquartered at Jaisalmer military station. The competition itself, from August 6 to August 14, featured operations by reconnaissance teams of the armies of eight countries mentioned.

The role of Army scouts in war includes (a) operating as lead elements and giving early warning about the enemy, (b) tracking and reporting movement behind enemy lines, (c) assisting in disruption of enemy’s mechanised movement by using anti-armour weapons, laying ambushes deep inside enemy territory and direct employment of various weapon systems. Their specialised skills enable them to assist with observation and listening posts, perform and help with navigation and help securing launchpads. They are trained to carry out silent battle reconnaissance after establishing contact and reconnaissance of crossing places over obstacles. Scouts are professionally trained to find out the strength and dispositions of the enemy, gaps in enemy defences and enemy’s likely reactions. They are also referred to as “eyes and ears” of the Army.

The world-class infrastructure created at Jaisalmer military station to conduct this prestigious event included a challenging obstacle course for the infantry combat vehicles spread over a distance of 6.7 km with 15 obstacles and another tough obstacle course for the Scout Masters teams with 22 obstacles laid over a distance of 1.3 km. The smooth and efficient conduct of the event drew appreciation from all the participating teams and international panel of judges including the co-host, Russia. The Russian delegation and senior military and diplomatic dignitaries from participating countries who visited Jaisalmer military station on May 14 and 15, were shown and briefed on the special training facilities created at Jaisalmer and Pokhran. The visiting teams were impressed with the overall arrangements and complimented the Indian organisers for creating an excellent infrastructure for the competition. The head of the Russian delegation Lieutenant General Budyshkin Albert Alienvich expressed confidence that India will provide the right opportunity for all teams to excel and bring long-term tangible benefits to international military cooperation.

The competition was conducted in five stages, which tested the overall skills of mechanised infantry scouts in simulated battlefield scenarios. The first stage on August 6-7 was infiltration and ambush in Khuri sand dunes, 50 km from Jaisalmer. The second stage was the Scout Specialist BMP Obstacle Course, on August 8-9, in Jaisalmer.

The third stage was the Scouts Trail Obstacle Course, on August 10-11, also in Jaisalmer. This stage encompassed the testing of reconnaissance squad in full combat load with weapons and simulation means to negotiate 22 obstacles designed on the battle concept of tactical move in a semi-urban target area. The scouts trail, spread over 1.3 km, was built on the design of the Russian Scout Training Course and posed a formidable challenge to all teams in the sun and sand environment of Jaisalmer military station. The scout teams were to complete the obstacle course through different scenarios of sudden encounter with the enemy in minimum time and with least penalties. The stage was conducted in two contiguous segments to include the one-mile run and the obstacle course. The reconnaissance squad negotiated the obstacle course according to the designed sequenced tactical drills, which involved stealthily approaching the target area, execute specific tasks such as controlled demolition, recovery of crypto material and thereafter exfiltrate. In this exacting stage Indian Army came first, with the teams of Russia, China, Uzbekistan, Belarus, Kazakhstan, Sudan and Armenia standing second to eighth, respectively.

For the foreign participants, most of whom are accustomed to moderate to cold climate, exposure to the terrain and climatic conditions of the sand dunes of the Thar desert during the May-August period, in high and dry heat, was an unforgettable experience, to say the least.

India’s defence minister Rajnath Singh was the chief guest at the closing ceremony in Jaisalmer military station on August 16, which was attended by General Bipin Rawat, Chief of the Army Staff, Lieutenant General S.K. Saini, General Officer Commanding in Chief Southern Command, officials from participating nations and members of the Inter-national Organising Committee of the International Army Games event.

It is interesting to note that Wang Quan-dwa, writing in China’s Defence Newspaper, an official newspaper of the People’s Liberation Army News Media Centre, on April 8, 2019 (edited and translated into English by China Military Online), stated that “Indian Special Operations Force are flashy but useless “white-elephant Armed Forces”… India’s Army, Navy and Air Force, as well as its internal affairs departments, all of them have their respective special forces, totalling tens of thousands of active personnel. However, due to the deficiency of the authorities and the lack of combat tactical training, as well as the power decentralisation, equipment shortage and weak ability in information acquisition, the Indian Special Forces are widely considered as “white-elephant armed forces”, that is, a troop “of enormous size, but flashy and useless”. The report, a classic piece of propaganda with fabrications also stated: “the performance of the Indian Special Forces in the India-Pakistan conflict occurred in February 2019 has further confirmed the above assertion…”.  Mr Quan-dwa is obviously not aware that the experience of the PLA in some skirmishes against the Indian Army at Nathula, in 1967, was such that for over half a century since then — including at Doklam — the Chinese have not pulled the trigger.

India’s National Defence Academy (NDA) for tri-services training, Indian Military Academy (IMA) for Army training and other naval and Air Force academies have been sought-after destinations for training cadets by many countries. This author, who trained in the first two - NDA and IMA, recalls that many of the foreign cadets who attended the courses acknowledged that the standards of physical fitness and mental/psychological endurance at these academies were very high.

A hundred years after World War I, from 2014 till 2018, then Allied nations yet again recalled the endurance, discipline and sheer bravery of Indian soldiers.

Thanks to Pakistan, whose fourth war against India, with export of terrorism, continues till date, the fighting capabilities of Indian soldiers have been further honed since both the World Wars.