The CM had appointed three cabinet ministers to hold talks with Gurjar leaders but they failed to convince Col. Bainsla. 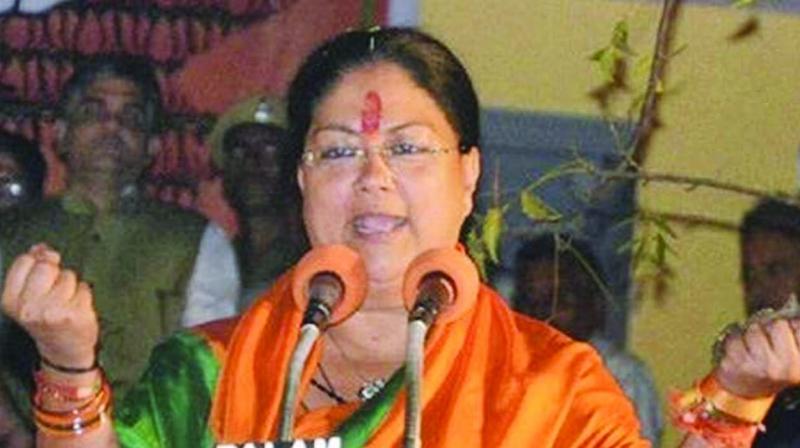 Jaipur: Amid threat of the Gurjar protest, the second leg of chief minister Vasundhara Raje’s Rajasthan Gaurav Yatra in Bharatpur division has been cancelled. The CM will now started a third phase of Gaurav Yatra in Jodhpur division from Tanot Mata temple in Jaisalmer from August 24.

No explanation has been offered for this cancellation. But, it is suspected that the decision to cancel the second leg was taken to avoid any unpleasant situation or confrontation with the Gurjar community, which had given a call for protest against the yatra. Gurjars have significant presence in all four districts of Bharatpur division.

After BJP chief Madan Lal Sani announced cancellation of the second leg on Saturday, the Gurjar Arakshan Sangharsh Samiti also withdrew its agitation. Col. Kirori Singh Bainsla, who has been leading the agitation for reservation to his community for over a decade including two violent protests in 2007 and 2008; once again sat on dharna in Sawai Madhopur on the proposed route of the CM’s yatra for not implementing agreement signed on May 19.

The CM had appointed three cabinet ministers to hold talks with Gurjar leaders but they failed to convince Col. Bainsla. In fact, he sacked there leaders Himmat Singh, Diwan Singh and Ram Bainsla, who ignored him and went for the talks with the ministers.

The government was hopeful of resolving the crisis when the yatra was postponed for four days because of former prime minister Atal Behari Vajpayee’s death. The second leg would have covered Gurjar dominated Sawai Madhopur, Dholpur, Karauli and Bharatpur districts. The Yatra was originally planned from August 20 but rescheduled when the CM had to leave for Delhi in wake of the former PM’s critical condition and later had to extend her stay because of his death.