The Kochi naval base will be used by carriers such as Alliance Air to operate 70-seater ATR aircraft to places such as Bengaluru. 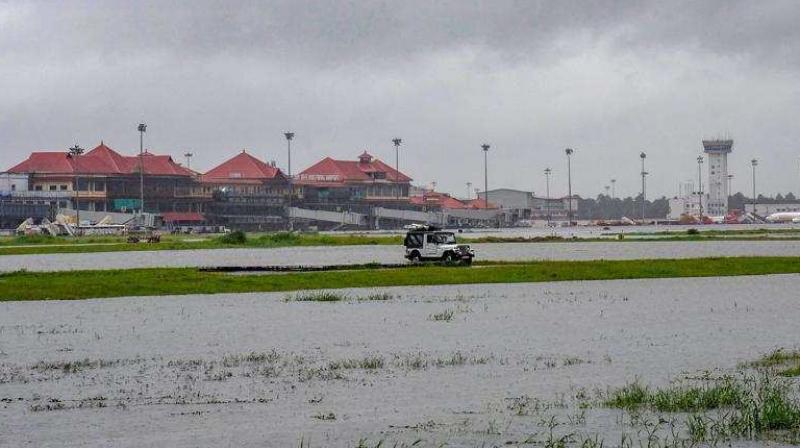 The main Kochi international airport, the seventh busiest in the country, has been rendered non-functional since August 14 due to flooding and torrential rains, and would remain closed till August 26. (Photo: PTI)

Kochi: The Centre said on Sunday a joint team of different aviation-related bodies and CISF inspected the Cochin Naval Base, a day after announcing operation of commercial flights from the base from Monday to aid rescue efforts in Kerala.

Civil aviation minister Suresh Prabhu also said the watch hour at Vijayawada and Begumpet airports has been extended to facilitate relief operations by IAF aircraft. Watch hour refers the period during which the airport remains open for operation.

“A Joint team comprising representatives from DGCA, BCAS, CISF, AAI and Indian Navy carried out inspection of #Cochin Naval Base today to check the feasibility of scheduled operations from there. Steps being taken to start operations with ATR-72 from Monday, 20th August,” the minister tweeted.

The base will be used by carriers such as Alliance Air, a subsidiary of Air India, to operate 70-seater ATR aircraft to places such as Bengaluru.

The minister had said on Saturday that flights from the naval base to other destinations such as Coimbatore, Madurai could also start operations. Other airlines are likely to join this effort too, he had said.

The main Kochi international airport, the seventh busiest in the country, has been rendered non-functional since August 14 due to flooding and torrential rains, and would remain closed till August 26.

“In view of disruption of flights from Cochin airport due to floods, a joint team sent by @MoCA_GoI has approved starting of scheduled commercial flights using ATRs by Alliance Air, a subsidiary of Air India, between Bangalore and Cochin Naval Air base,” Prabhu had tweeted last evening.

As of now, both domestic and international flights to Kochi are being diverted to other destinations such as Trivendrum and Calicut.

The minister in a series of tweets today said that following a request from the Home and Defence Ministries, “watch hours at Vijayawada and Begumpet airports have been extended by Airport Authority of India” to assist in relief operations with IAF aircraft.

Besides, the Directorate General of Civil Aviation (DGCA) is in contact with three private helicopter operators to carry out relief operations after a request was received from the Kerala government.

“Scheduled domestic airlines have also been advised to ensure that airfares for flights to/from Trivandrum and Calicut airports in Kerala and nearby airports i.e. Mangalore and Coimbatore are kept at optimal level proportionate to sector distance,” he tweeted.

On the other hand, Air India has waived cargo charges for transportation of medicine and other materials to Kerala. An Air India spokesperson said the resident commissioners of Kerala in different states would be the nodal authority through whom the relief would be dispatched via Air India flights.

Meanwhile, full service carrier Vistara said on Sunday it is operating all its Kochi-bound flight from Thiruvananthapuram in view of the closure of the Kochi airport.

“These flights include those to/from Delhi and Chennai, with Economy class fares capped at Rs 10,000 and Rs 7,500, respectively,” it said.

Vistara does not usually operate to Thiruvananthapuram but made this special arrangement to help people travel into and outside of the city/state, it said.