Kerala submerged in sea of woes

Thousands of people marooned in various areas continue to cry for help. 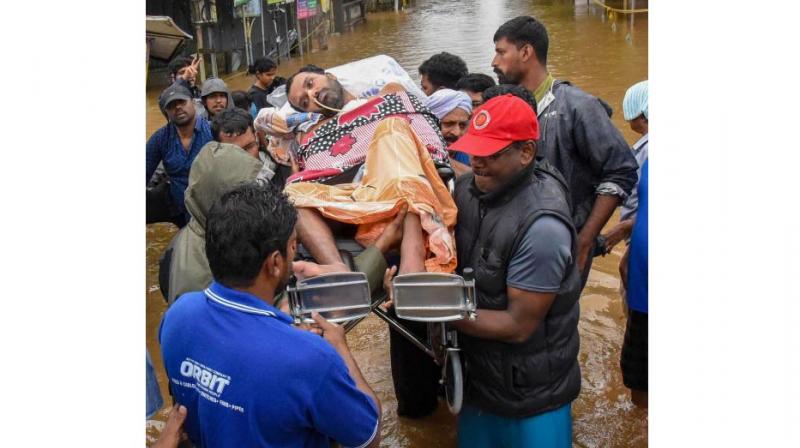 A bed-ridden patient being rescued from a flood-affected region in Aluva at Kochi. (Photo: PTI)

Thiruvananthapuram: The situation in Chengannur in Alappuzha district continues to be extremely grave with thousands of people marooned in different villages still begging for help.

The fishing boats sent from Thiruvanantha-puram played a major role in saving hundreds of people from the flooded areas. The persons accompanying the boats had a tough time navigating through the powerful under-currents and swirls to reach the marooned people.

A large number of people from Pandanad, Thiruvanvandoor and Edanad were rescued by the fishing boats. They did a commendable job in bringing women, children, elderly and the sick to safety. At some places they had a tough time convincing local people not to board the boats in large numbers while going to rescue operations in the areas that were cut off. This was done to ensure maximum space was left vacant for people who are rescued from the affected areas.

“We are doing whatever is required to bring the last stranded person to safety,” said a youth carrying out the rescue operation. Despite the boats facing the risk of getting damaged in the rough areas, the fisherfolk ensured that priority was given for saving lives.

Since Air Force helicopters can airlift only a limited number of people, the bulk of rescue is being carried out by the fishing boats. The sick and elderly who were rescued were rushed to the nearby hospitals in ambulances for immediate medical attention.

Chief minister Pinar-ayi Vijayan described the situation as extrem-ely grave. He said local MLA Saji Cherian’s warning that thousands of people might perish in the floods at Chengannur was due to his anxiety about the lives of the people.

Mr Cherian had on Friday made passionate appeals to the Army and defence forces to deploy helicopters and boats to rescue the stranded.

The worst-affected is Pandanad where hundreds of people are stranded in buildings which are almost submerged.  Four panchayats in Chennganur are completely flooded. The situation is extremely grim in Edanad, Pandanad. Thiruvanvandoor and Nataka.

Other areas like Mangalam, Puthenkavu. Arattupuzha and Mannar adjoining Chengannur have been cut off from the mainland for the past five days.