India   All India  19 Aug 2018  After huge relief from rains, Kerala to now focus on rehabilitation
India, All India

After huge relief from rains, Kerala to now focus on rehabilitation

CM Pinarayi Vijayan put the number of those displaced at 7.24 lakh and said most of the affected had been rescued. 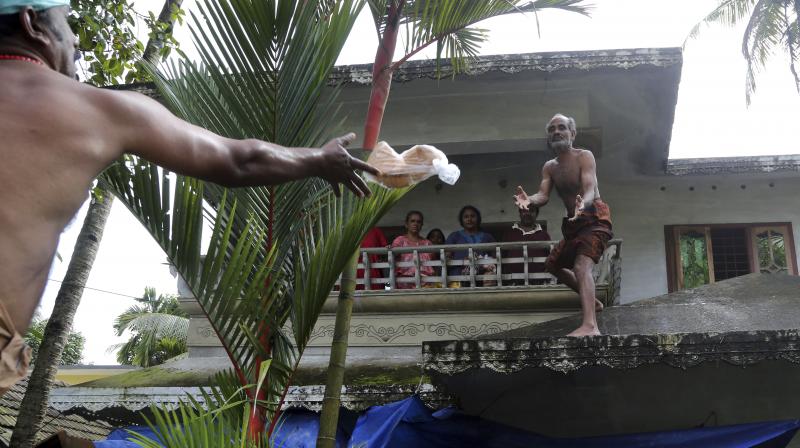 A volunteer throws a pack of bread towards a family stranded in a flooded area in Chengannur. (Photo: PTI)

Thiruvananthapuram: The deadly monsoon rains that savaged Kerala claimed 13 more lives on Sunday, taking the toll over 300 in the last ten days as Chief Minister Pinarayi Vijayan said most of the marooned had been rescued and the focus would now be on their rehabilitation.

In a big relief, there was respite from the rains in most parts of the state today after nearly two weeks of virtually non-stop downpour and the red alert has been lifted in several districts.

President Ram Nath Kovind spoke to Kerala Governor P Sathasivam and Chief Minister Pinarayi Vijayan and enquired about the situation and acknowledged the grit and resilience of the people in coming together in this trying hour.

"Assured the people of the state that entire nation was with them," the Rashtrapati Bhavan tweeted.

The deadliest deluge in close to a century has claimed over 300 lives since August 8 when the south-west monsoon set in over Kerala. More than 80 dams were opened, leading to floods while the rains also triggered landslides. 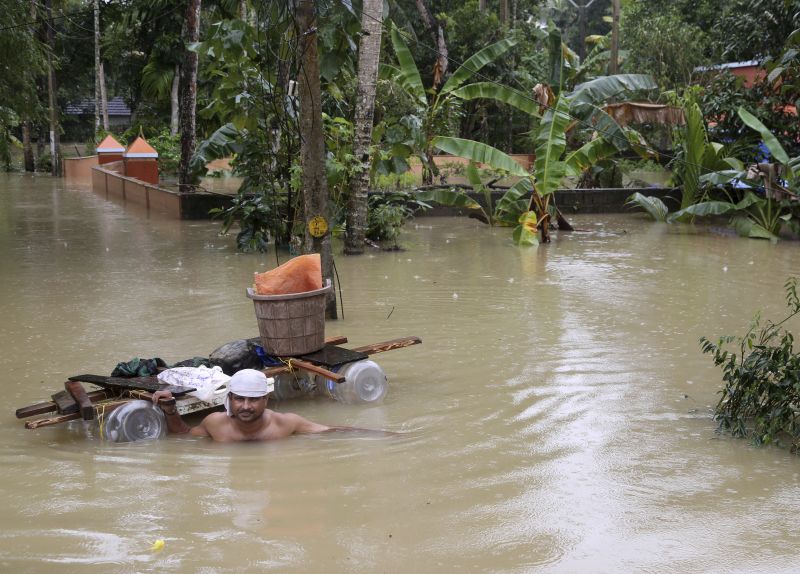 A stranded man wades through flood waters with a makeshift raft in Chengannur. (Photo: PTI)

High-range Idukki district, Malappuram and Thrissur are among the worst hit.

In good news, the rainfall intensity over Kerala has decreased over the past two days, the meteorology department said today, adding there is no alert of heavy precipitation for the next four days in the state.

The number of those displaced in the torrential rains was today put at 7.24 lakh by Chief Minister Pinarayi Vijayan, who said most of the affected had been rescued and the government's focus would now be their rehabilitation.

Thirteen people lost their lives today and 7,24,649 lakh people were in 5,645 relief camps, he told reporters after a review meeting.

Around 22,000 people were rescued today in the operations launched by the defence personnel, national and state disaster response forces, fishermen and local people.

He was all praise for the efforts put in by personnel of the Army, Navy, Air Force, Coast Guard, NDRF, fishermen and local people in rescuing people. 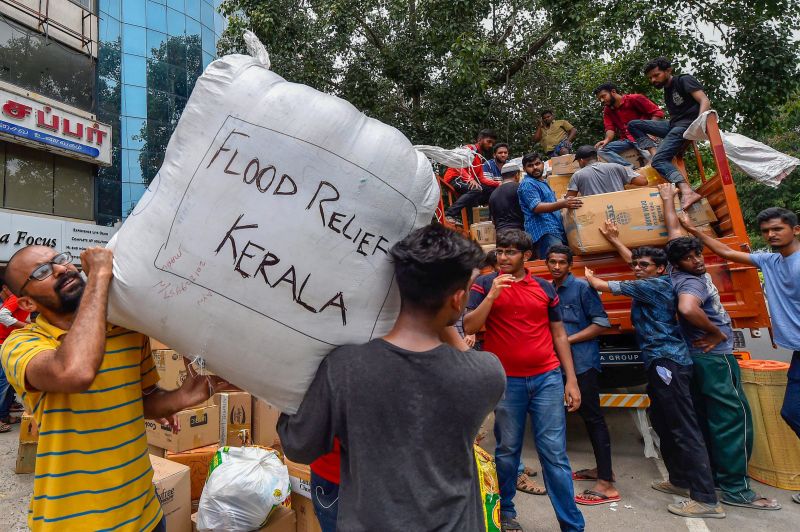 Volunteers segregate flood relief material donated by general public to be sent to Kerala, in Chennai on Sunday. (Photo: PTI)

The Chief Minister said in each panchayat six health officers would be deployed to ensure there was no outbreak of any communicable diseases as the flood water recedes.

Vijayan said the state government would distribute 36 lakh textbooks free of cost to school children who had lost their books in the floods.

Commercial flight operations from Kochi, hit following the closure of its international airport due to flooding, would resume tomorrow from the Naval airport to Coimbatore and Bengaluru, bringing some relief to travellers.

Meanwhile, as flood waters receded in some areas, people in relief camps have slowly started returning to their homes.

Skeletal services were run between Ernakulam and Thiruvananthapuram and on Alapuzha-Kottayam routes.

The trains were packed with flood-affected people moving to the houses of their friends and relatives.

Efforts are on to restore power and water supply in areas where the power systems have been completely destroyed. The government also decided to pay Rs 3,000 per day each to the fishermen who participated in the rescue operations.

Amid horrors of the torrential rains, the wedding of a woman inmate today brought cheers to a relief camp in northern Malappuram district.

Meanwhile, several people who reached their houses found it difficult to control their tears seeing their dwelling in total disarray.

Muddy homes, utensils strewn all over and furniture turned upside down greeted some of them as they returned home. Many buildings have developed cracks and pillars were seen perched precariously after water receded in some places.

"Our life has been destroyed. My pension book has gone," said an elderly woman near Kochi.

Near the Nedumbassery airport, bodies of at least 20 animals could be seen floating in the waters.

As per a preliminary estimate, there was Rs 4,441 crore loss to the government following the damage to roads and bridges. At least 220 bridges have been damaged and 59 were still under water, officials said.