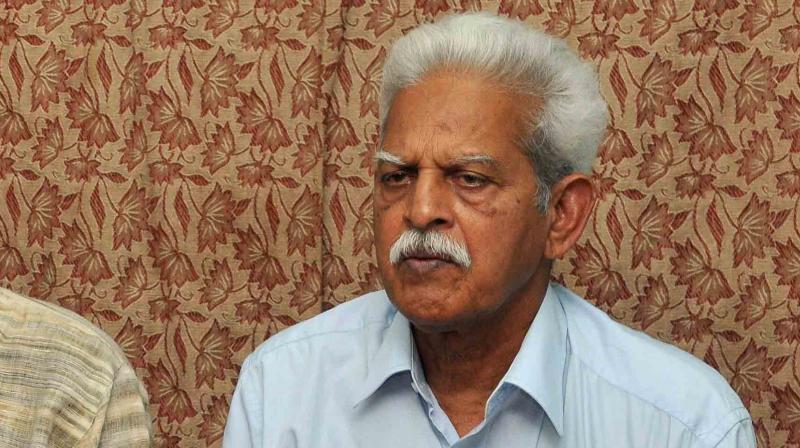 A bench headed by Justice U U Lalit issued notice on the plea, and said it would be heard on August 10.

The top court observed that the interim protection granted to Rao would continue.

When the matter came up for hearing on Tuesday, the apex court asked Additional Solicitor General (ASG) S V Raju that if he wishes to file something, the court would grant him time.

"We have not formally issued notice. In case you are agreeable, then we will go to the final hearing and in case you wish to put in something, we will grant you time, the bench, also comprising Justices S R Bhat and Sudhanshu Dhulia, said.

The bench observed that in a matter like this where only the medical condition is the issue, it is not something which would require extensive hearing.

The ASG said he wanted time to file something in the matter.

He said Rao is already protected and is out on bail.

"Considering the nature of controversy involved in the matter, it is put to the counsel for the parties that the matter shall be disposed of on the next occasion," the bench said.

"Since we have not issued any formal notice in the matter, notice is hereby issued returnable on August 10," it said.

The case relates to alleged inflammatory speeches made at the Elgar Parishad conclave held in Pune on December 31, 2017, which the police claimed triggered violence the next day near the Koregaon-Bhima war memorial on the outskirts of the western Maharashtra city.

The Pune Police had also claimed that the conclave was organised by people with alleged Maoist links. The NIA later took over the probe in the matter.

In his plea filed against the April 13 order of the high court, Rao has said, "The petitioner is an 83-year-old renowned Telugu poet and orator, who has undergone over two years of incarceration as an under-trial."

The plea submitted that "any further incarceration would ring the death knell for him as advancing age and deteriorating health are a fatal combination".

It said Rao had challenged the high court order as he was not granted an extension of bail despite his age and precarious health condition, and his prayer to shift to Hyderabad was also denied.

Rao was arrested on August 28, 2018 from his Hyderabad residence and is an under-trial in the case for which an FIR was lodged by Pune police on January 8, 2018 under various sections of the Indian Penal Code and the Unlawful Activities (Prevention) Act.

Initially, Rao said he was put under house arrest following an order of the apex court. On November 17, 2018, he was taken into police custody and later shifted to the Taloja jail in Navi Mumbai.

On February 22, 2021, the Bombay High Court granted him interim bail on medical grounds and he was released from jail on March 6, 2021.

Giving extensive details of his health condition, including his sufferings in jail, Rao had said the high court order dated February 22, 2021 had contemplated that the petitioner could be on medical bail for an extended period and even permanently on medical grounds, depending on his condition supported by medical examination reports.

It added that after being granted bail, the petitioner's health had deteriorated and he had developed an umbilical hernia for which he had to undergo surgery.

He needs to be operated for cataract in both eyes, which he has not undertaken as the cost is prohibitive in Mumbai, the plea said, adding the petitioner has also been suffering from neurological problems.

"It is submitted that in the totality of circumstances, the trial will take not less than 10 years. In fact, one of the accused in the case, Father Stan Swamy, who was suffering from similar ailments as the petitioner, passed away even before the trial could start," it said.

The high court rejected the plea but extended the time for the activist to surrender before the Taloja prison authorities by three months to enable him to undergo cataract surgery.