India   All India  19 Jul 2019  MP: Bhopal turning into heat chamber due to loss of trees
India, All India

MP: Bhopal turning into heat chamber due to loss of trees

Loss of greenery combined with expanding concrete jungle has resulted in the sharp increase in urban temperature in the city of lakes. 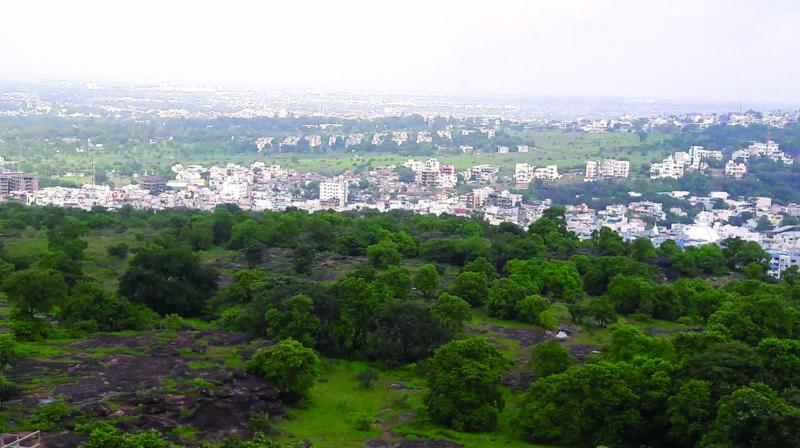 Bhopal’s green cover has shrunk by 44 per cent in just two decades.

Bhopal: An ominous climate change may be knocking at the doors of capital city of Madhya Pradesh, Bhopal, now almost a barren shadow of its once green past.

The massive loss of green cover combined with ever expanding concrete jungle in the historic city has resulted in sharp increase in urban temperature, a phenomenon known as the “urban heat island”.

“There is a phenomenal increase of mean maximum temperature (MMT) in Bhopal by almost ten degree Celsius in the past one decade. It is a wakeup call for us. Unless we take up measures to reverse the situation urgently, the future generation will have to face its consequences,” chief secretary of MP government S.R. Mohanty said.

No wonder, weather experts have termed the outgoing summer in Bhopal city the warmest and longest one in the past few decades.

The massive loss of green cover in the capital city was the key factor behind Bhopal turning almost into a heat chamber in summer.

A recent survey conducted by Indian Institute of Science (IISc), Bangalore, has revealed that Bhopal’s green cover has shrunk by 44 per cent in just two decades. The city’s green cover has been reduced to 11 per cent in 2018 and it is feared that it will reduce to 4.10 per cent by 2030, if the current trend of erosion of vegetation in Bhopal continued.

Bhopal, in fact, has earned the dubious distinction of being one of four cities in the country currently witnessing fastest degeneration of green cover.

The other three cities clubbed with Bhopal in the area are Hyderabad, Ahmedabad and Kolkata.

“We are already late. A climate disaster is waiting to happen if the situation is not reversed,” Bhopal divisional commissioner Kalpana Srivastav who coined the unique “zero budget” concept to restore green cover in the city, told this newspaper on Wednesday.

“It is basically a community-driven plantation drive in which various government agencies, stake holders, educational institutions, different social  and professional groups and even the Army have been roped in to lend a helping hand to make it a mass movement,” Ms Srivastav, a 1992 batch IAS officer of Madhya Pradesh cadre, explained. Lack of community participation cannot sustain such a long-drawn-out drive, she added.

She has put in place a credible mechanism to sustain the drive till it achieved its mission of making Bhopal the ‘Green capital of India’.

“The task is daunting, but not unachievable. I will have to ensure that the whole exercise of plantation drive does not end up as a ritualistic one or a one-season affair. I will make sure that it would a continuous and uninterrupted exercise,” Ms Srivastav said.

A working group headed by the chief secretary has been constituted to monitor execution of the project regularly.

Besides, Ms Srivastav too has created a core group to plan, execute and review progress of plantation drive periodically to plug loopholes in the strategy, if noticed at the ground level.

The project, christened as “Green Bhopal, Cool Bhopal”, has envisaged plantation of four crore trees to double the city’s canopy. It has been targeted to plant 11 lakh saplings in the current year.

In fact, over four lakh trees have already been planted since the inception of the project on April 12 this year.

Plantation sites and species have also been identified to ensure spread of green cover in eco-sensitive zones of the city.

Besides banks of the large lake — known in local parlance as “Badi Talab” — one of the key sources of drinking water supply to 18 lakh inhabitants of capital city, plantation drive will also cover five hills — Idgah, Katara, Dronanchal Newari and Arera and Shyamla — dotting Bhopal. Fifty per cent of 325 parks in the city have been denuded. They will be restored with plantation.

Traditional trees such as amla, mango, strawberry, neem, peepal etc, found useful for society in some way or the other, have been identified for plantation.

“More than plantation drive, what is essential for increasing green cover in the city is to stop mindless felling of trees, either illegally or for government or private projects,” retired bureaucrat and noted social activist Nirmala Buchh suggested.

At a meeting held under the chairmanship of Ms Srivastav on Wednesday, a decision has been taken to build an alternative road in a locality in the city to save at least 5,000 trees.