The BJP announced that its members will spend the night in the House in protest. 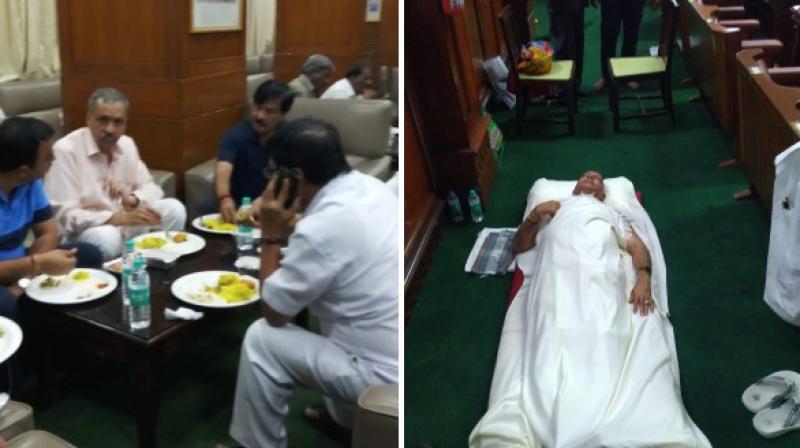 Amid a furore on the issue with BJP members demanding that the confidence motion be put to vote immediately, the Chair adjourned the House till Friday. (Photo: ANI)

Bengaluru: Adding a new twist to the ongoing political drama in the Karnataka, BJP legislators have staged a night-long sit-in at Vidhana Soudha, protesting against the Congress-JD(S) government dragging its feet on the trust vote. The BJP MLAs were seen having discussions, dining together and sleeping on the green floor and the well of the House.

"This government has lost the majority. They tried to drag on the issue and tried to provoke us but we acted with patience. We will continue to press for a trust vote on the motion. We will stage night-long dharna in the House," Yeddyurappa told reporters here.

BJP Chief BS Yeddyurappa slept on the green floor of the House along with his party MLAs. 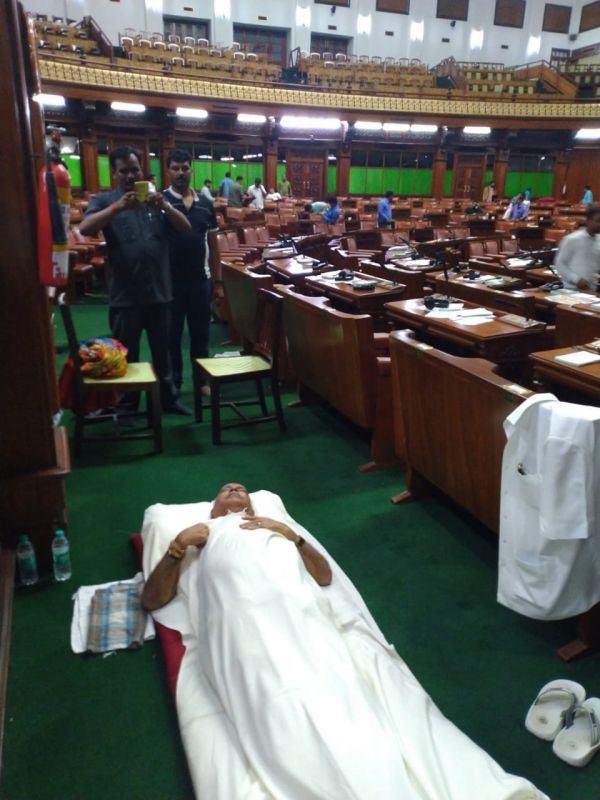 Many BJP MLAs were seen sleeping in the Well of the House and on the passage leading to the Well. 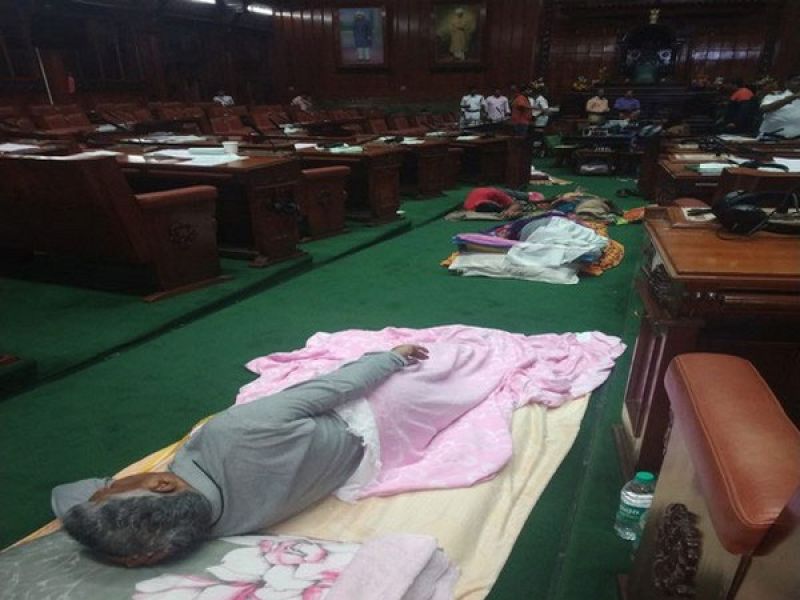 Earlier, state BJP Chief BS Yeddyurappa was seen having discussions with his colleagues. 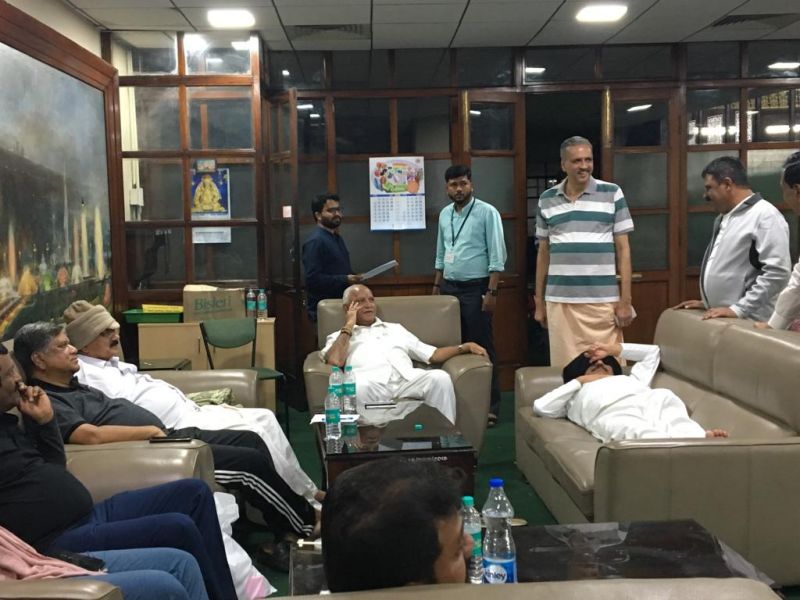 The lawmakers also had their dinner at the Opposition Lounge of the Karnataka Assembly. 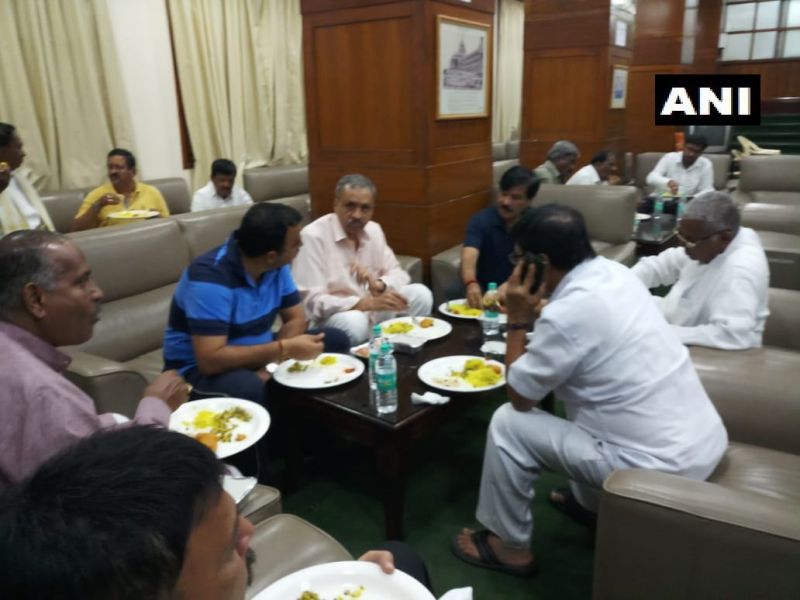 BLP MLAs were also seen having a discussion together. 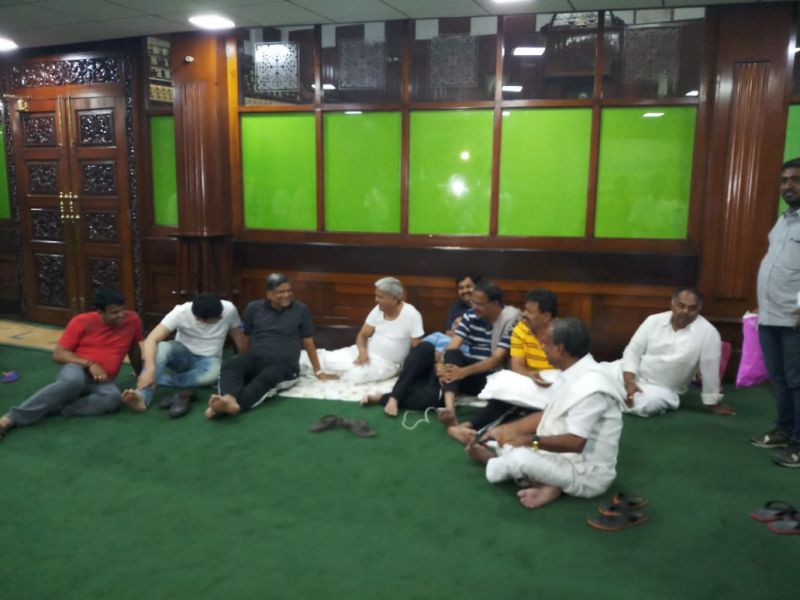 Shortly, after the Karnataka Assembly was adjourned on Thursday without a trial of strength, Governor Vajubhai Vala wrote a letter to Chief Minister HD Kumaraswamy asking him to prove majority on the floor of the House by tomorrow afternoon. Vala told Kumaraswamy to prove his government's majority by 1.30 pm on Friday. This came after a BJP delegation headed by former minister Jagdish Shettar rushed to the Raj Bhavan and met the Governor seeking completion of the business today itself.

Amid a furore on the issue with BJP members demanding that the confidence motion be put to vote immediately, the Chair adjourned the House till Friday. The BJP announced that its members will spend the night in the House in protest.

The 13-month-old Congress-JD(S) government had earlier this month slumped into a minority following the resignation of the dissident MLAs. Sixteen MLAs from the ruling coalition including thirteen Congress and three JD(S)MLAs have resigned.

If the dissident MLAs, who are in Mumbai, are counted out, the BJP appears to have the support of 105 MLAs in the 225-member state Assembly including one nominated MLA.