Unplanned growth has reached even the remote corners of the state which sits on a time bomb. 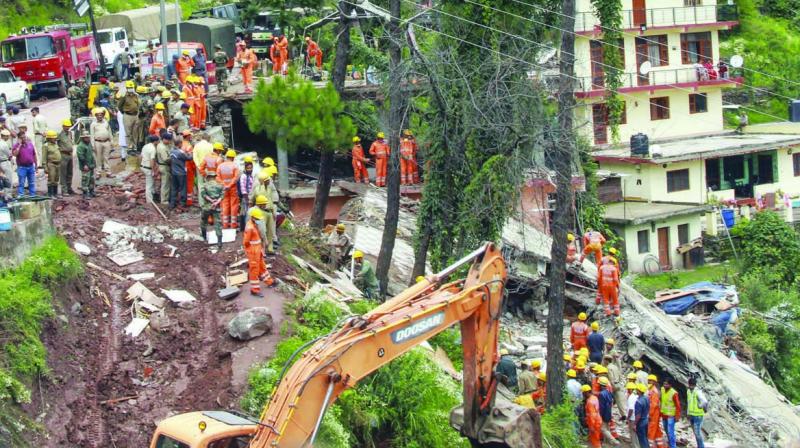 Rescue and relief work underway as a building collapsed on Sunday evening after heavy rain in Solan district. (Photo: PTI)

Solan: The recent tragedy in Solan of Himachal Pardesh where 17 Army jawans were killed after a building collapsed, has once exposed the underbelly of planning in the hill state.

The state had many beautiful towns developed by the British. However, it has ruined all of them. Unplanned growth has reached even the remote corners of the state which sits on a time bomb. Any natural disaster could cause a heavy loss here. Lack of uniform policy and political considerations have cost the state heavily.

Himachal was Considered role model for hill states thanks to Britishers developed many of its towns. The countryside was also dotted with hilly architecture using local material, keeping in mind the ecological conditions of the state. However, as Himachal got a full statehood, housing and urban planning were hit hard.

There are around 15,000 illegal buildings in the state at present. Nothing has changed even after the Supreme Court had ordered demolition of 13 hotels in Kasauli for violations of Town and Country Planning laws. A woman town and country planner was shot dead by one such man who had constructed a six-storey guesthouse illegally.

Thirty-eight Manali hotels were issued notices by the National Green Tribunal (NGT). There were similar violations in Dharamshala and Shimla, but the state government took action only on those hotels and resorts that figured in the list of the Supreme Court and NGT.

There are thousands of illegal structures in the state that pose a threat to the lives of the people besides threatening the ecology. The state government is doing nothing because of political reasons.

There are 12,694 illegal structures in Himachal Pradesh and the state government wanted to regularise them under the Town and Country Planning Regularisation Amendment Act-2017. According to experts, the state needs to adopt evaluation of under stratum before construction, action against government laxity and penalising errant individuals.

The former mayor of Shimla, Sanjay Chauhan, said, “One needs to look at things since 1977 when an interim development plan for almost the entire state came into being and was implemented in 1979. For the last 40 years, it has not been finalised.”

He added, “This interim plan has seen several changes depending on what suits the government, bureaucrats and builders.”  To give a free run to politicians, officials and builders the peripheral villages were brought out of the Act’s ambit, which caused ecology adversely, Mr Chauhan said. Around 90 per cent of the buildings, primarily residential, flouted rules on safe construction, concluded a CAG report.

“There needs to be a solid policy as per the scientific specifications for construction in the state and more importantly it needs to be implemented strictly all over the state. Presently, the common man who abides by rules suffers and the mafia and people who bypass the rules flourish,” feels Mohan Sharma an activist from Solan.