The park authorities has formulated a strategy to tranquillise the tiger, which was now trapped inside the bedroom of a house. 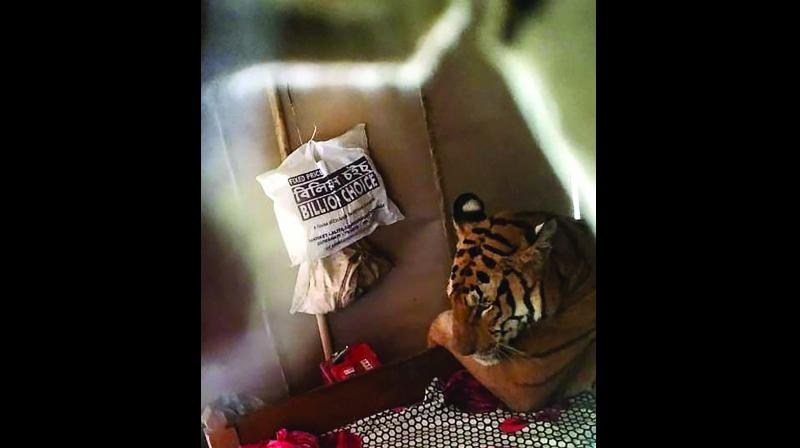 A tiger is seen relaxing on a bed near Kaziranga National Park in Assam.

Guwahati: The devastating flood is not only a tragedy for residents of Assam alone but it has brought catastrophe for wildlife of the state also as on Thursday, a tiger which strayed away from Kaziranaga National Park, which is completely under water, was spotted relaxing on the bed of a house next to a national highway near the park.

The park authorities said that forest guard had spotted the tiger near the national highways as it escaped from Kaziranga National Park. The Wildlife Trust of India said that probably disturbed by the flooding, the tiger jumped across the wall of a scrap garage and took refuge in a room.

The park authorities has formulated a strategy to tranquillise the tiger, which was now trapped inside the bedroom of a house.

About 11 hog deer were killed by vehicles on the highway crossing through the park. The rest drowned.”

The park authorities pointed out, “There are more than 30,000 hog deers in the park. With their population being so high, so will the death toll. Also, they are nervous animals which make them more prone to danger.”

About 33 new highlands constructed by the forest department along with the earlier 111 ones have played a major role in reducing the number of casualties.

“However, not every animal uses highlands. They are mainly used by rhinos and hog deers. Elephants and tigers mostly avoid it. In fact, a tiger was also spotted taking shelter on the rooftop of a house in Moabari,” the park authorities said. Informing that forest guards, officials and people in the vicinity around the park also rescued 57 animals, he said that park authorities have already released 43 animals after medication at the Centre for Wildlife Rehabilitation and Conservation while 10, including two rhinos are still under treatment.

Pointing out that 95 per cent area had submerged in the water, he however said that water level has started receding.

Admitting that flooding of the Kaziranga National Park is equally necessary for revival of the ecosystem of the park, the park authorities said that 169 of the 199 anti-poaching camps remained inundated.

The Pobitora Wildlife Sanctuary, with a core area of 16 sq km, has the highest concentration of rhinos in Assam.