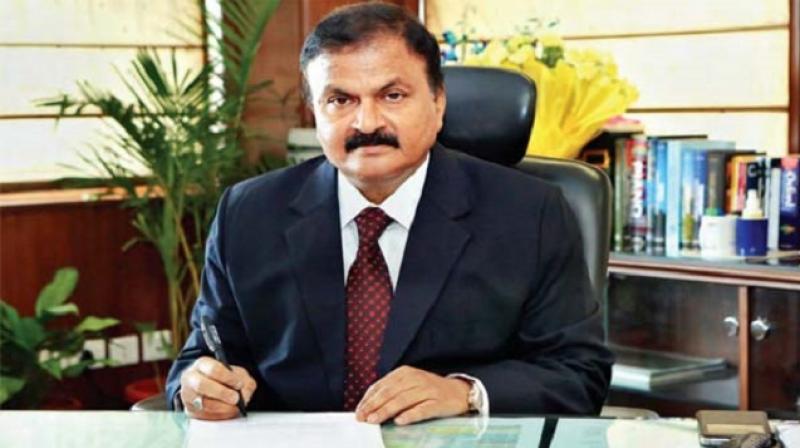 New Delhi: Dr Guruprasad Mohapatra, Secretary of the Department for Promotion of Industry and Internal Trade (DPIIT), who monitored the supply of medical oxygen across the country under very challenging circumstances during the second wave of COVID-19, passed away on Saturday morning at AIIMS Delhi.

The Gujarat cadre 1986-batch IAS officer was admitted to AIIMS on April 19 due to post-Covid complications. He was set to retire from service on April 30, 2022.
He was the head of one of the Empowered Groups to combat the COVID-19 crisis.

Prime Minister Narendra Modi expressed condolences on the death of Dr Guruprasad Mohapatra and recalled his long association with him.
Taking to Twitter, PM Modi said Mohapatra had had a great understanding of administrative issues and was known for his innovative zeal.

"Saddened by the demise of Dr Guruprasad Mohapatra, DPIIT Secretary. I had worked with him extensively in Gujarat and at the Centre. He had a great understanding of administrative issues and was known for his innovative zeal. Condolences to his family and friends. Om Shanti," he tweeted.

Pan-India civil servants and doctors have been working round-the-clock to rescue people from the clutches of second wave of COVID-19 infection.
Besides Mohaptra, several other civil servants have been working to tackle COVID-19 crisis in country at the risk to their personal health and safety. Doctors and healthcare workers, who are leading India's fight from the front, are also relentlessly working 24x7 while risking their lives. As many as 730 doctors died during the second wave of the COVID pandemic, according to a data by the Indian Medical Association.

As the head of one of the Empowered Groups, Dr Mohapatra worked with utmost dedication in the ongoing fight against COVID-19 pandemic, Gauba underlined.

"Even after he had tested positive and was not well, he continued to work for long hours, monitoring the supply of oxygen across the country, under very challenging circumstances," he said further.

Lauding Mohapatra, Gauba said the DPIIT secretary will be remembered for his proactive approach and his commitment to public service.

"His untimely death is an irreparable loss to all of us. I extend my deepest condolences to the members of his family," he said.

Mohapatra was a Gujarat cadre 1986 batch IAS officer. At the state level, he held the portfolio of Municipal Commissioner in Surat, Gujarat. Before taking over as the secretary of DPIIT, he had served as the chairman of the Airports Authority of India (AAI) where he brought about many changes in its strategic operations.

He worked as the Municipal Commissioner in Surat from 1999 to 2002, during which he was actively involved in the process of converting Surat into one of the models of urban governance with its thrust on Solid Waste Management, quality infrastructure and sound financial management.

The IAS officer also worked as a Municipal Commissioner in Ahmedabad for more than 3 years, during which he was instrumental in developing such iconic projects such as Sabarmati Riverfront, BRTS, Kankaria Lakefront and Heritage Promotion.

Union Minister Piyush Goyal also expressed sadness over his death and conveyed sympathies to his family and friends.

"Extremely saddened to hear about the loss of Dr Guruprasad Mohapatra, Secretary DPIIT. His long-standing service and dedication to the Nation have left a lasting impact. I convey my deepest sympathies to his family and friends," he tweeted.

Mentioning Mohapatra's 'exemplary dedication', Union Minister for Chemicals and Fertilizers Sadananda Gowda tweeted, "Saddened to know about the demise of Dr Guruprasad Mohapatra, Secretary @DIPPGOI. He served the nation with exemplary dedication throughout his career. I extend my deepest condolences to his family and friends in this hour of grief. Om Shanti."
Sumita Dawra, Additional Secretary, DPIIT also expressed grief over Mohapatra's death.

Dawra said Mohapatra, as Chairman of Empowered Group 2, proactively planned oxygen supply for the country, through an institutionalized framework that smoothly facilitated each state and Union Territory to source oxygen for their needs.

"It is heartbreaking to hear about the sad demise of our beloved Secretary of DPIIT, Dr Guruprasad Mohapatra. As Chairman of Empowered Group 2, he proactively planned oxygen supply for the country, through an institutionalised framework that smoothly facilitated each state and UT to source oxygen for their needs," she said.

"He guided the team to deliver beyond what we thought was possible, as the country delivered 10 times the normal amount of medical oxygen on daily basis to all hospitals during the height of the second wave of COVID," the Additional Secretary added.

Dawra highlighted that Mohapatra continued to continually guide over telephonic calls and video conferences even after testing COVID positive, and despite running a high temperature.

"He chaired the crucial meeting of the Empowered Group to review supply of oxygen to the states on 19 April 2021, a few hours before he was hospitalised in AIIMS," she informed.

"A deeply committed officer, with outstanding qualities of leadership, foresight and dedication to public service, he has imparted to us, through his personal example, some of the greatest lessons in governance and public service. My sincere condolences to his family. This is a deeply personal loss for the DPIIT family," she added.