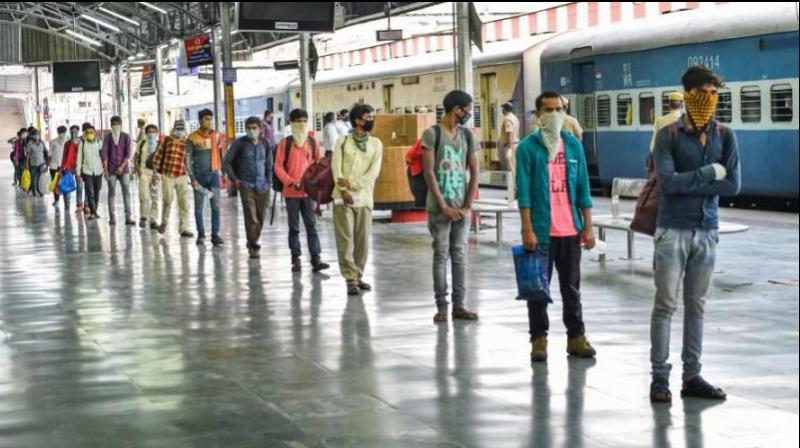 Mumbai: As guest workers have started returning to Maharashtra, the Maharashtra government has directed the police personnel to ensure that thermal screening of migrant labourers is strictly implemented. They are also being asked to self-quarantine for two weeks.

According to sources in the home department, so far 1.50 lakh migrant labourers have arrived in Pune, Nashik, Nagpur and Panvel and Mumbai. Maharashtra had sent more than 12 lakh migrant labourers to their respective states by 488 special Shramik trains during lockdowns owing to Coronavirus pandemic closure of operations of the industries and rendering many people jobless.

Parag Jain, secretary of social justice department and special assistance, said that 25 trains have been arriving every day in Maharashtra carrying guest labourers. "Most of the trains are arriving from UP, Bihar, Jharakhand and Rajashthan," he said.

A senior railway official said that at present it is very difficult to identify that those arriving in Mumbai or any cities of Maharashtra are migrant workers as the railway does not have any mechanism to do that. "However, tickets of the passengers are being booked in groups by the builders and industrialists for their employees to bring back them in their units," a senior official said.

Home Minister Anil Deshmukh claimed that 16 thousands to 17 thousands migrant labourers have been arriving in Maharashtra every day. In a statement, he said that all the on average 11,500 workers have been returning to Mumbai, Thane and Navi Mumbai, while 4,000 to 5,000 labourers have been going to Gondia, Nandurbar, Kolhapur, Nagpur and Pune.