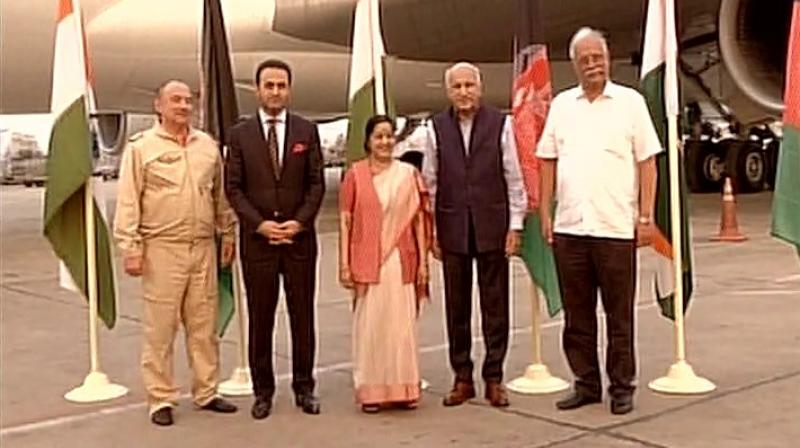 The arrival of the cargo flight from Kabul to Delhi marked the inauguration of the dedicated air freight corridor between the two countries.

The Kabul to Delhi flight, which carried 60 tonnes of cargo (mainly 'hing') from Afghanistan, was flagged off in Kabul by President of Afghanistan Ashraf Ghani in the presence of several Afghan Cabinet Ministers and India's Ambassador to Afghanistan Manpreet Vohra.

"The connectivity established through the air freight corridor will provide Afghanistan, a landlocked country, greater access to markets in India, and will allow Afghan businessmen to leverage India's economic growth and trade networks for its benefit. It would enable Afghan farmers quick and direct access to the Indian markets for their perishable produce," said Deepak Mittal, Joint Secretary, (PAI-Pakistan, Afghanistan, India) in the Ministry of External Affairs in Delhi.

"This flight has added another chapter to the connectivity that has existed since times immemorial. We hope to extend air cargo flights to other cities between India and Afghanistan," said Gopal Bagley, spokesperson of Ministry of External Affairs.

The decision to establish an Air Freight Corridor between Afghanistan and India was taken in the meeting between Prime Minister Narendra Modi and President Ashraf Ghani in September 2016 during the President Ghani's visit to India.

"During his visit to India in September 2016, President Ghani had urged Indian and Afghan businessmen to achieve a target of USD 10 billion in trade over the next five years," said Dr. Mittal.

"Keeping with President Ghani's vision, we have eased our visa regime for Afghan businesspersons. Also, we have increased the duration of stay for Afghan tourists and patients since February this year. Presently, there are four to five flights operating daily between Afghanistan and India, bringing nearly 1,000 Afghans, many of them for medical treatment in Indian hospitals," Mittal further said.

"India has been closely working with Afghanistan to create alternate and reliable access routes for the landlocked country," Mittal added.

Earlier, in January 2015, India had announced its decision to allow Afghan Trucks to enter the Indian Territory through Atari land check post for offloading and loading goods from and to Afghanistan. India is also cooperating with Afghanistan and Iran for development of the Chabahar Port.

Later on in May 2016, a trilateral transport and transit agreement based on sea access through Chabahar was signed in the presence of the leaders of the three countries in Tehran.

"These routes and corridors are aimed at providing sea, land and air access route for Afghanistan to regional and global markets in South Asia and beyond," Mittal added.

"This is just the beginning .We are optimistic for further adding to the volume of trade between the two countries .We will be expanding to flights other provinces like Kandahar, Heart and Mazar-e-Sharif," Abdali added.

"India remains committed to assist Afghanistan in all possible ways in its political, security and economic transitions to ensure emergence of a sovereign, united, democratic, pluralistic, stable, peaceful and prosperous Afghanistan," said Bagley.