Arson in Kalimpong, GJM leaders march with bodies of 2 supporters

The GJM denied its involvement in the Kalimpong violence alleging these were a ‘handiwork’ of the TMC to ‘malign’ its party. 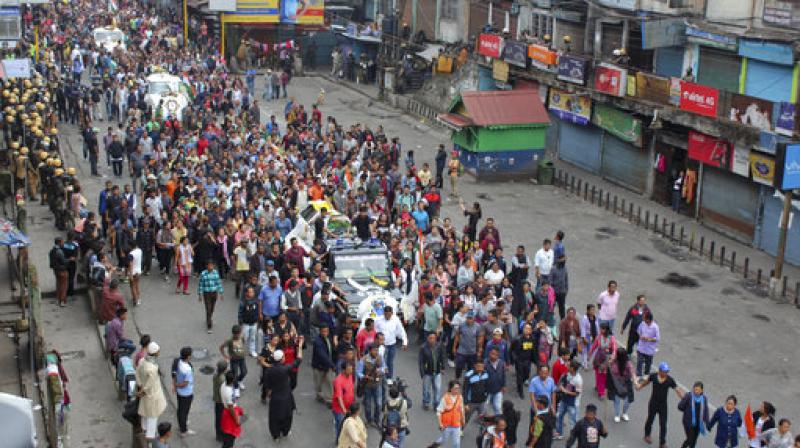 Activists of Gorkha Janmukti Morcha take out a funeral procession with the bodies of their three activists who were killed on Saturday in Darjeeling. (AP Photo)

Darjeeling/New Delhi: A public library, two panchayat offices and a police vehicle were set ablaze at Kalimpong on Sunday, though Darjeeling, the hub of the GJM-led agitation for a separate Gorkhaland, remained incident-free.

Gorkha Janmukti Morcha (GJM) activists took out a protest march carrying the bodies of two party supporters who, they alleged, were killed in police firing on Saturday.

Union Home Minister Rajnath Singh spoke to West Bengal Chief Minister Mamata Banerjee for the second time in two days and appealed to the protesters not to resort to violence and come forward for a dialogue to resolve any issue.

The police said that a library, two panchayat offices and a police vehicle were set on fire in Kalimpong in the afternoon as the indefinite shutdown call given by the GJM to press for a separate state had entered its seventh day.

The GJM, however, denied its involvement in the incidents and alleged that these were a ‘handiwork’ of the Trinamool Congress (TMC) to ‘malign’ it. The party has claimed that three of its activists were killed on Saturday.

The protesters, carrying black flags and the tricolour, assembled at Chowkbazar. They shouted slogans in support of Gorkhaland and demanded that the police and security personnel be ‘removed immediately’ from Darjeeling.

Carrying bodies of the two supporters in a hearse with GJM flags and posters terming them as ‘martyrs of Gorkhaland’, thousands of locals, including GJM activists, shouted slogans like ‘police, go back’.

Despite the GJM's claim, ADG (law and order) Anuj Sharma had on Saturday denied the allegation of police firing. He had, however, said that one person had died on Saturday, but did not specify the cause of his death.

Thirty-five security personnel, including an India Reserve Battalion officer, were injured during widespread clashes between GJM activists and the police on Saturday.

There was a massive deployment of police and paramilitary personnel, but they didn't stop the GJM from taking out the march with the bodies. Internet services have been blocked in Darjeeling since 9 am. According to police sources, the step was taken to stop the GJM activists from using social media to spread ‘messages and provocative posts’.

The GJM gave a call for a 12-hour bandh, but it failed to evoke much response. Army contingents were present in Darjeeling in the morning, but later a heavy deployment of paramilitary and police force personnel was made.

The Muslim community also took out a rally demanding restoration of peace in the hills and creation of Gorkhaland. Darjeeling MLA Amar Singh Rai criticised the TMC government in the state, saying the situation could have been prevented from ‘going out of control’.

"The police and the security forces should immediately be removed from the hills as a confidence-building measure," Rai said. He also accused the BJP-led government at the Centre for ‘not doing enough’, despite Darjeeling having an MLA from the saffron party.

"The central and the state governments are using us as pawns to serve their own political interests. We are ready for talks with the Centre, but the agenda has to be only Gorkhaland," Rai said.

Rajnath Singh said resorting to violence would never help them find a solution and asked the people in the hills to remain calm and peaceful.

"All parties concerned and stakeholders should resolve their differences and misunderstandings through dialogue in an amicable environment," the home minister said.

In a democracy like India, resorting to violence would never lead to a solution, he said, emphasising that "every issue can be resolved through dialogue". "I appeal to the people living in Darjeeling and nearby areas to remain calm and peaceful. Nobody should resort to violence," he said in a series of tweets.

GJM workers, who launched their agitation on June eight, had on Saturday hurled petrol bombs, stones and bottles at the police at several places which led the security forces to lob teargas shells and resort to baton-charge to disperse the mobs, according to a police official.

Army contingents were deployed to control the situation and they staged flag marches in several areas of the violence-hit hill areas, including Darjeeling and Kurseong. Singmari in Darjeeling had turned into a battleground as GJM activists clashed with the anti-riot police personnel, who fired teargas shells and lathi-charged the agitators.