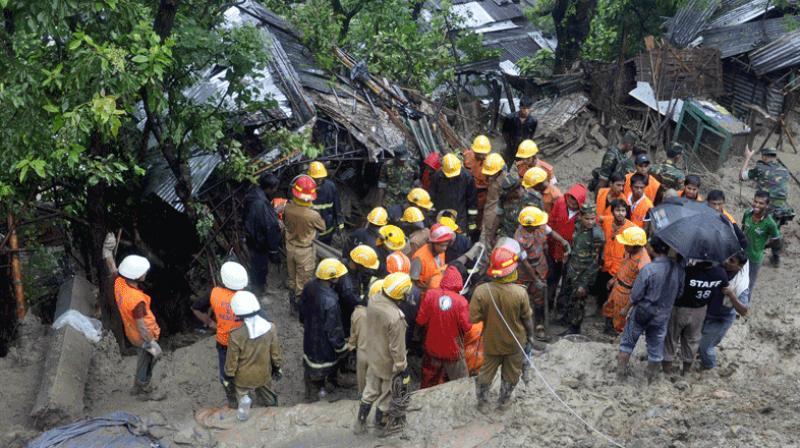 Kameng (Arunachal Pradesh): The Indian Army on Monday rescued 200 civilians, including 50 children, who were stranded due to massive landslides in West Kameng district.

Aide-De-Camps (ADC) Bomdila, R Tibba said, "Army troops at Bhalukpong, rescued 200 civilians (including 70 ladies and 50 children) from a landslide, wherein they were stranded since yesterday in 70 vehicles".

Tibba further added that, "The Company's commander in that location along with Medical Officer (MO) and two Junior Commissioned Officer (JCOs) with 20 other ranks rushed to the site and rescued the stranded civilians. All the people have been evacuated to a safer place and are given necessary medicines and food. Meanwhile, the border roads personal are trying to clear the landslides and work is in progress".

"We all are extremely thankful to the Army troops for their timely assistance and in relieving us all from the agony of being stranded in a place without food, water and medical aid," a rescued civilian said.

Since June 13, heavy and incessant rain has battered West Kameng district with multiple landslides in Bomdila, Dirang, Singchung, Nafra and Kalaktang subdivisions, resulting in traffic blockade, disruption in power and water supply and major damages to private and public property.

There has been abnormal rise in water level reaching danger zones in rivers and streams of Dirang, Tenga and Rupa areas.

The district water supply source at Mandala has been damaged including Hydel stations. The line could not be restored due to road blockage at multiple locations near Jamiri point, Dedza, Sessa, Munna Camp and Nechiphu to Bana.

Works of landslide clearance are in progress by Border Road Task Force (BRTF).

Traffic movement has also being strictly regulated as both township roads.