The girl was brought to Lucknow and put in the care of a shelter home, Nirvana, that named her “Ehsaas”. 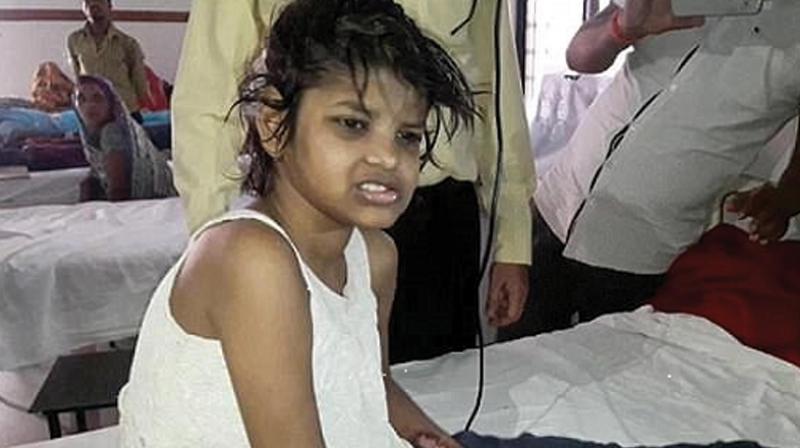 Ehsaas appeared under-nourished at the time of being rescued and brought to a hospital.

The 9-year-old girl earlier did not speak a word, screamed and screeched like monkeys and crawled on four limbs. Now, at a care home in Lucknow, she has started speaking a few words. She enjoys human company and walks on two legs.

Lucknow: Two youths, Shoeb Raini and Rajesh Yagyasaini, were travelling through the forests of Kataraniaghat in Uttar Pradesh’s Bahraich where they saw a girl, aged about nine years, surrounded by monkeys. The youths thought that the simians had trapped the girl. They tried to scare the animals, but they would not move.

After struggling for a while to rescue the girl, the youths informed the police and the girl was saved somehow. She was taken to a hospital. The incident happened in January last year.

A day after her rescue, the doctors found that the girl could not walk — she would crawl on all four limbs. She threw off her clothes and would lick food straight from the saucer without using her hands. She would also scream and screech like monkeys.

During her stay in hospital, scores of monkeys would come to visit her every day and peer at her through the windowpanes. 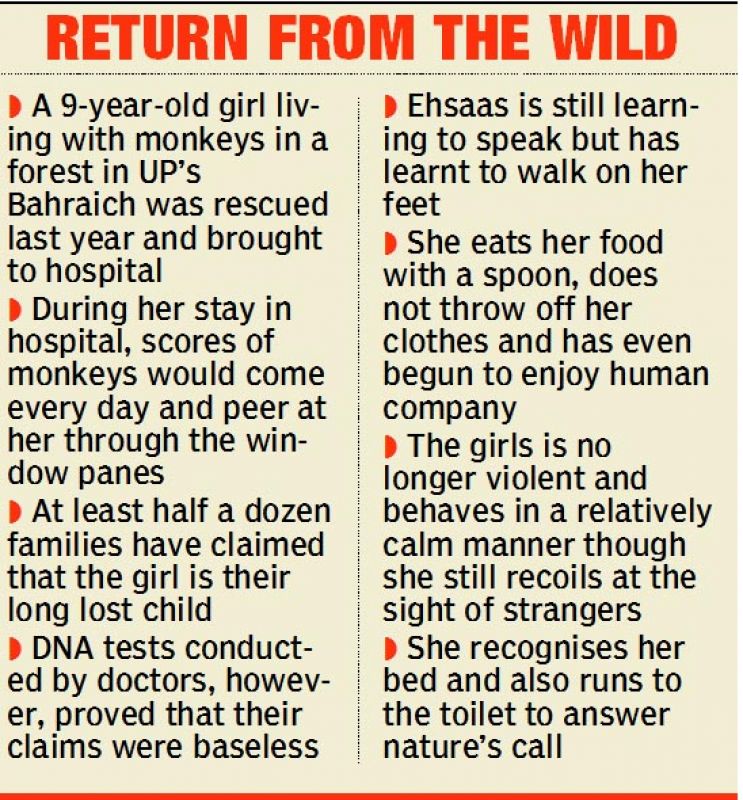 She was then shifted to an isolation ward of the district hospital and when a local newspaper published her story, she became known as the Mowgli girl — an obvious reference to Rudyard Kipling’s The Jungle Book that is the story of a boy who grows up among wild animals.

The girl was brought to Lucknow and put in the care of a shelter home, Nirvana, that named her “Ehsaas”. A lot of water has flown under the bridge since then.

Today, almost 15 months later, Ehsaas has learnt to walk. She eats her food with a spoon and does not throw off her clothes. She has begun to enjoy human company. She is no longer violent and behaves in a relatively calm manner though she still recoils at the sight of strangers — one reason why visitors are not allowed to meet the girl.

The doctors say that she is not mentally challenged, but will need more time before she learns to speak and become “normal”.

“She recognises her bed, goes to the toilet and is comfortable in the company of Rani who takes care of her,” says Suresh Dhopla, head of Nirvana.

Rani says, “Ehsaas is learning to speak. She calls me ‘Amma’ and also knows a few other words. I am confident that very soon, she will be like one of us.”

Ehsaas has befriended Pooja, a 16-year-old mentally challenged girl who can hardly express herself. It has been about 10 months since Ehsaas and Pooja became friends though neither can speak properly or understand.

“Pooja is always with Ehsaas. She has developmental challenges of her own, but the two exchange friendly vibes and are comfortable with each other,” says Dhopla.

Ehsaas has been taking lessons from a speech therapist for the past three months and fortunately, she is picking up. A neurologist visits her regularly, gradually helping the girl to mix up with humans.

Ironically, there have been at least half a dozen families that have claimed that the girl is their long lost child. A family from Jaunpur, another from Pilibhit and yet another from Lakhimpur claimed that Ehsaas was their missing daughter. However, DNA tests proved the claims wrong.

Rehabilitation experts are also hoping to find out if the girl had been with monkeys since early days after birth or had strayed into the forest after she grew up a little. “Things are changing very fast for her,” said an official.

The only thing that has not changed is that monkeys still come to her every day and peer through the window!