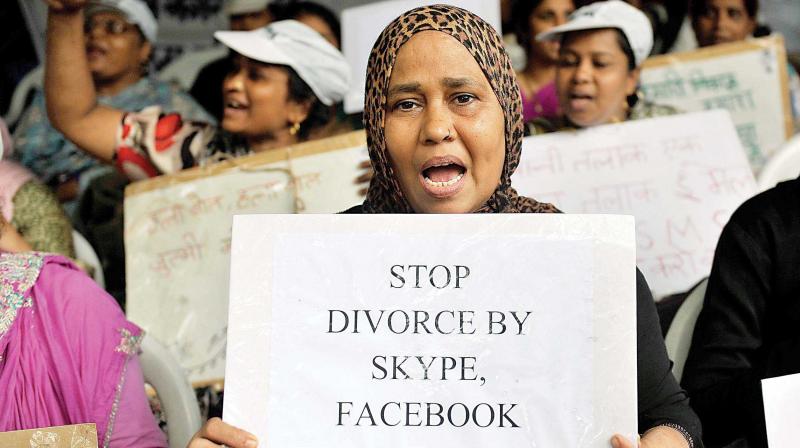 New Delhi: Even as the Supreme Court reserved its verdict on triple talaq, the All India Muslim Personal Law Board (AIMPLB) on Thursday agreed to the court’s suggestion to include a clause in the nikhanama (marriage agreement) about instantaneous triple talaq.

Kapil Sibal, senior counsel representing AIMPLB, informed the five-judge bench headed by Chief Justice of India J.S. Khehar that the Board had agreed to issue an advisory to kazis to give an option to Muslim women to opt out of instant triple talaq before giving their consent for nikah.

“I had a meeting with the Board members yesterday that it (a clause whereby a woman can reject being divorced by talaq-e-biddat) will be part of the nikhanama. We will send a model nikhanama to all the kazis to follow. We ourselves want to give up this practice,” Mr Sibal told the court while concluding his arguments.

On Wednesday, the CJI had asked Mr Sibal whether his client, the AIMPLB, could issue a directive to clerics to record at the time of the nikahnama whether the woman accepts triple talaq or not, and Mr Sibal returned with a positive response a day later. The bench, also comprising Justices Kurian Joseph, Rohinton Nariman, Uday Lalit and Abdul Nazeer, asked the Board to file a copy of the advisory to be sent as well as a copy of the proposed nikhanama.

The triple talaq hearing on a batch of petitions filed by Muslim Women’s Quest for Equlity and others was completed in six record days by the Constitution Bench sitting during summer vacations.

During the hearing the judges had a copy of Quran in English for reference as the arguments centred  around Quran and Islamic personal laws.

When Justice Kurian Joseph asked Mr Sibal, “Why it is that a custom which is theologically sinful is part of the practice of the community?”, he replied, “It may be sinful but it is a practice in existence for 1,400 years. We don’t want the court to enter a slippery slope. Court should not venture into the area and interpret something which is not in its domain. Personal law, customs and faith cannot be tested under the garb of fundamental rights.”

When the court pointed out that triple talaq does not have the sanction of Holy Quran, Mr Sibal said the Quran is not the only source of Islam, which had developed through Hadiths and expositions of various scholars on the teachings of the Prophet.

On Wednesday, Mr Sibal cautioned the court from deciding this issue as it could lead to a backlash from the Muslim community, which might view it as its rights being infringed upon and resort to supporting practices like polygamy and oral divorce.

Justice Joseph told Mr Sibal, “Triple talaq is sinful. How can something which is sinful to God can be virtuous? If it is bad in theology it cannot be acceptable?” Mr Sibal said that the court should be concerned with institutional morality and not popular morality.

Attorney general Mukul Rohatgi, appearing for the Centre, had asserted that the issue of triple talaq should not be seen as discrimination between majority and minority communities or the majority forcing its views on minorities. “It is a tussle between haves and have-nots within the system. It is intra-community struggle between men and women because men are more resourceful, earner and educated,” he said.

It is the duty of the Supreme Court to step in and put an end to the practice which is not an integral part of religion, he added.

Former Union law minister Salman Khurshid had, on Friday, asserted in the Supreme Court that triple talaq form of divorce in one stroke is sinful and said that anything sinful could not have been ordained by Islam.

Advocate V.K. Biju argued that triple talaq is not ordained in the Quran. Anything that is admittedly bad in theology (a religious belief) and sinful in religion can never be masquerading as faith. As such what is bad is theology and sinful in that religion can obviously not come under the protection of Article 25 of the Constitution (freedom of religion), he said, adding that though many Muslim countries had banned triple talaq, it was shameful that India, a secular country, is yet to enact a law removing it.

Mr Anand Grover summed up saying triple talaq is not found in Quran, that it was deprecated by the Prophet himself and was considered sinful by all schools of thought of Sunnis and Shias.

Buckling under party pressure, Babul retracts decision to step down as MP