The three cases were Mexico vs US, Germany vs US and Paraguay vs US. 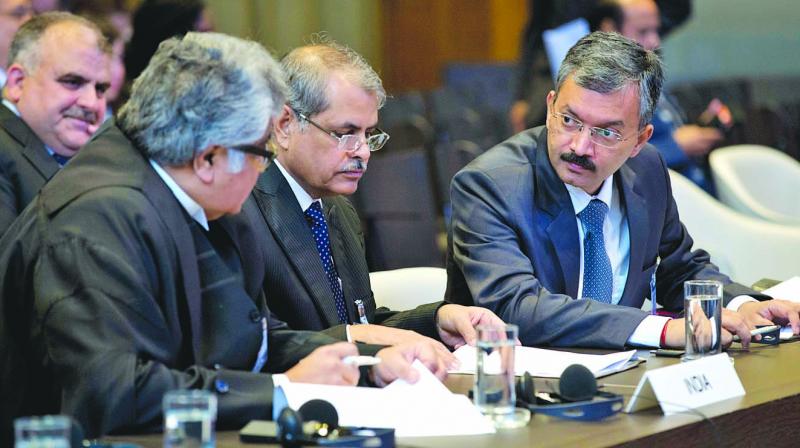 Top Supreme Court advocate Harish Salve, who represented the Indian government, and MEA joint secretary Deepak Mittal, along with the rest of the Indian delegation, wait for judges to enter the World Court in The Hague, Netherlands. (Photo: AP)

The three cases were Mexico vs US, Germany vs US and Paraguay vs US.

Mexico vs US:
In 2003, Mexico took the US to the ICJ over a dispute concerning alleged violations of the Vienna Convention with respect to 54 Mexican nationals who were sentenced to death in the US. They requested the court to ensure that the US should not execute or set execution dates for any Mexican national before the court passed judgement. However, the US Supreme Court held that the order of the ICJ was not binding unless Congress has enacted statutes implementing it or unless the treaty itself is “self- executing.”

Germany vs US:
In the second case, German national Walter LaGrand and his brother Karl were arrested in US state of Arizona in 1982 on suspicion of armed robbery and murder. In 1999, Germany instituted proceedings against the US for allegedly failing to inform the duo of their right to consular access, guaranteed by the Vienna Convention. However, Karl was executed before the case started and Germany demanded that the US compensate his family and halt Walter’s execution till proceedings were pending. In its verdict the following day, the ICJ asked the US to ensure Walter was not executed during proceedings. He was executed in a gas chamber in Arizona after the ruling.

Paraguay vs US
The third case was again filed against the US when Paraguay dragged America to the ICJ in 1998 alleging that the state of Virginia had violated Vienna Convention by failing to inform Angel Francisco Breard, a Paraguayan, of his right to contact the Paraguayan consulate for assistance after his arrest. The Hague had called on the US to “take all measures” to prevent the execution of Breard, pending a final decision in the proceedings instituted by Paraguay.

Breard was executed on April 14, five days after the verdict. Paraguay later withdrew the case.