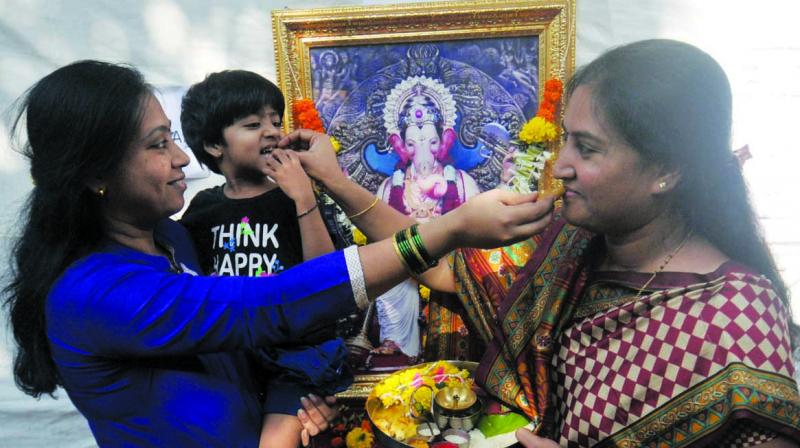 New Delhi/Islamabad: In a major diplomatic victory for India, the International Court of Justice (ICJ) barred Pakistan on Thursday from executing former Indian naval officer Kulbhushan Jadhav, convicted by a Pakistani military court on espionage charges, till the court pronounces its final decision in the case.

The Hague court rejected Pakistan’s claims that it did not have jurisdiction to hear the case, ruled that India should have been granted consular access, and accepted the contention that there was a real danger to Jadhav’s life.

India heaved a collective sigh of relief with political leaders hailing the order, and the former naval officer’s friends in Mumbai erupting in joy and bursting firecrackers. The ICJ will now call for a more comprehensive filing from India before it decides the case, a process that could take years. Pakistan risks international condemnation if it violates the ICJ order now and hangs Jadhav.

A shocked Pakistan tried to wriggle out of accepting the verdict as its foreign office spokesperson Nafees Zakaria said, “We do not accept the jurisdiction of the ICJ in matters related to the national security of the country.”

Granting the provisional relief sought by India, the ICJ ordered Pakistan to take all measures to ensure that Jadhav is not executed pending the final decision and inform the court of all the measures taken in implementation of the order. 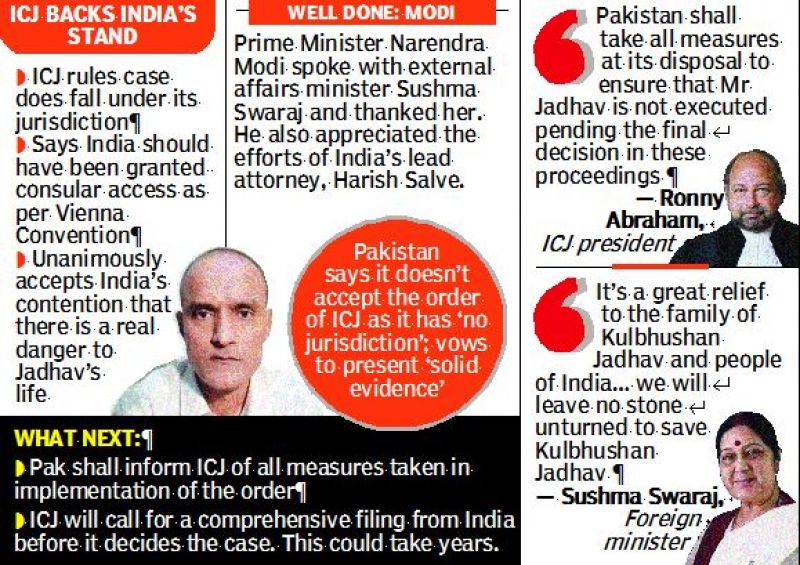 The court also said that it was legally “binding” on both countries and involves “international legal obligations”. The ICJ is the top United Nations legal body for hearing disputes between countries and its rulings are binding, though occasionally flouted.

The ICJ said that “the mere fact that Mr Jadhav is under a death sentence and might therefore be executed is sufficient to demonstrate the existence of a risk of irreparable prejudice to the rights claimed by India.”

The Jadhav case — a rare foray for India and Pakistan into the international courts — has highlighted the recent sharp upsurge in tensions between the nuclear-armed rivals.

Jadhav was arrested in March 2016 and convicted last month. India denies he is a spy, and accuses Pakistan of violating international laws by not allowing it access to Jadhav. Pakistan has cited a bilateral treaty to deny consular access to Jadhav and also denies kidnapping him.

A jubilant New Delhi described the ICJ verdict as a “unanimous, favourable, clear and unambiguous” order, adding that “it is a matter of great relief” for all Indians. India also termed the verdict “an essential first step in ensuring justice for Mr Jadhav” and pointed out that it was legally binding on Pakistan to adhere to.

On May 8, India had petitioned the ICJ against the sentence. Defence minister Arun Jaitley termed the verdict “a great vindication of India’s stance”, adding that external affairs minister Sushma Swaraj had “piloted this strategy” (of petitioning the ICJ).

The move is being seen as a masterstroke of the Narendra Modi government after New Delhi overcame its traditional reluctance of petitioning the ICJ in order to save the life of Jadhav.

Mr Modi also expressed satisfaction at the ICJ verdict and spoke to Ms Swaraj to thank her while appreciating the efforts of advocate Harish Salve who represented India in the case.

Ms Swaraj also tweeted, “The ICJ order has come as a great relief to the family of Kulbhushan Jadhav and people of India. We are grateful to Mr Harish Salve for presenting India’s case so effectively before ICJ. I assure the nation that under the leadership of PM Modi we will leave no stone unturned to save Kulbhushan Jadhav.”

Mr Salve was quoted as saying that he had felt a positive energy and connect with the judges while arguing the matter, adding that “we are now a lot more emboldened and a lot more invigorated”.

Reading out a unanimous verdict of an 11-judge bench, ICJ President Ronny Abraham said, “Certain measures must be indicated to protect the rights claimed by India pending its (ICJ’s) final decision.”

The ICJ indicated that consular access for Jadhav fell very much under the ambit of the Vienna Convention, a treaty guaranteeing diplomatic assistance to foreigners accused of crimes.