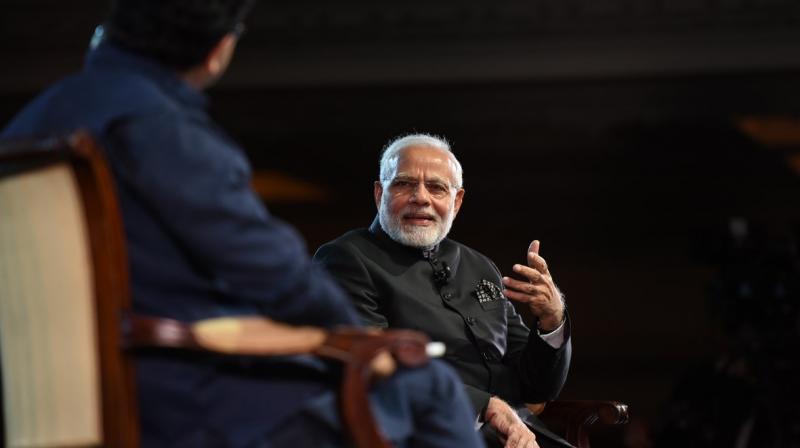 Prime Minister Narendra Modi called criticism a 'goldmine' that helped him improve himself and correct his mistakes. (Photo: Twitter | @PIB_India)

New Delhi/London: Prime Minister Narendra Modi gave a fitting reply to Congress which has been targeting him for his silence over several issues.

Addressing diaspora event 'Bharat Ki Baat, Sabke Saath' at the packed Central Hall at Westminster in downtown London, PM Modi said that he and his government are fine with the criticism and even welcomed it, but underlined that criticism was different from allegations levelled without any basis.

The Prime Minister also explained why he remained silent in face of relentless criticism back home.

PM Modi said his problem wasn't criticism which required a person to research and ascertain the facts to make a point but it was too much hard work and many people did not invest as much.

Drawing a distinction between criticism and allegation, Prime Minister Narendra Modi said, "To criticise, one has to research and find proper facts. Sadly, it does not happen now. What happens instead is allegations. I want this Government to be criticized. Criticism makes democracy strong. Democracy cannot succeed without constructive criticism."

The Prime Minister called criticism a "goldmine" that helped him improve himself and correct his mistakes.

But why doesn't he respond to the criticism, asked Prasoon Joshi, the adman-lyricist.

Joshi, who was last year appointed to head the Chairman of the Central Board of Film Certification, was moderating the session which allowed selected individuals in India and abroad to ask questions.

PM Modi acknowledged that there was a charge that he didn't speak up despite "so much criticism".

This, he said, happened because he gave the criticism much importance, trying to understand where it was coming from and then rectify his mistakes.

"But it is not my job to shut up people who are criticising me, my job is to think where am I going wrong," he said. It was his government's intentions, he said, which were beyond reproach.

The explanation comes just a day after Prime Minister Narendra Modi's predecessor Dr Manmohan Singh advised him to speak more, an irony considering how Narendra Modi would mock the noted economist for his silence in public and derisively called him "Maun' Mohan Singh".

Dr Manmohan Singh told The Indian Express on Tuesday that he had the same advice for PM Modi. "I think the Prime Minister should follow his own advice to me and he should speak more often," he said.

Other Congress leaders such as Rahul Gandhi have turned Prime Minister Narendra Modi's silence on charges of corruption and nepotism that the opposition levels at him into campaign material for elections.

Rahul Gandhi has on numerous occasions attacked the Prime Minister for his silence on celebrity designer Nirav Modi (wanted in fraud cases) slipping out of the country and the Rafale deal.

When asked whether he can change the country alone, Prime Minister Narendra Modi said he was an ordinary citizen just like any other Indian. "We have a million problems but we have a billion solutions," he said. "I can make mistakes but I will not do any work with the ill intention," the Prime Minister said.

PM Modi also spoke about crimes against women and asked parties not to politicise the heart-wrenching incidents.

Attacking earlier governments, Prime Minister Narendra Modi said days of incremental change are over and Indians have become more and more aspirational under the BJP-led government at the Centre.

PM Modi said people have more expectations from his government because they know that it can deliver. "People know that when they say something, the Government will listen and do it. Days of incremental change are over," the Prime Minister said.

During the 130-minute interaction, Prime Minister Narendra Modi addressed the Indian community on several issues ranging from surgical strikes to toilets to how he thinks his government's performance should be evaluated.