India   All India  19 Apr 2018  Called Pak on surgical strike, they were scared to come on phone: PM Modi
India, All India

Called Pak on surgical strike, they were scared to come on phone: PM Modi

PM Modi also asserted that India will not tolerate those exporting terror and will respond to them 'in the language they understand'. 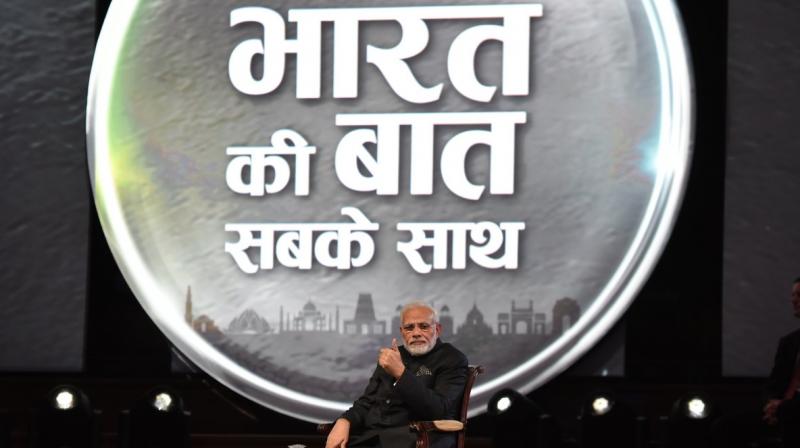 New Delhi/London: Prime Minister Narendra Modi on Wednesday said that India waited for an hour to inform Pakistan about the surgical strikes conducted across the Line of Control (LoC) in 2016 before making the news public.

However, the Pakistan army officers were scared to come on the phone, the Prime Minister added while addressing the Indian diaspora in London.

"I said before India gets to know, we should call Pakistan and tell them. We were calling them since 11 am but they were scared to come on phone, at 12 we spoke to them and then told the Indian media," PM Modi told the gathering to a round of applause.

Launching a fierce attack on Pakistan, the Prime Minister asserted that India will not tolerate those who like to export terror and will respond to them "in the language they understand".

At the 'Bharat Ki Baat, Sabke Saath' programme organised at the iconic Central Hall Westminster in downtown London, Prime Minister Narendra Modi said when "someone has put a terror export factory in place and makes attempts to attack us from the back, Modi knows how to answer in the same language".

PM Modi's remarks came in response to a question on the surgical strikes by a member of the audience who had speech disability. The Prime Minister choked with emotion on seeing the speech impaired elderly man ask the question on the strikes with the help of a person, and lauded him for his strength and conviction.

In his reply, PM Modi said, "Those who like exporting terror, I want to tell them that India has changed and their antics will not be tolerated. We believe in peace. But we will not tolerate those who like to export terror. We will give back strong answers and in the language they understand. Terrorism will never be accepted."

The Prime Minister also hailed the Army and said the soldiers executed the surgical strikes with perfection and were back after finishing the task before dawn.

On being asked about his thoughts on some people questioning the valour of the Army, PM Modi said he does not want to use the stage to criticise anyone.

"I just hope, God gives them wisdom," he said to peals of laughter from the audience.

"During World War I and II, we had no stake but our soldiers took part in the wars. These were big sacrifices. Look at our role in UN peacekeeping forces," PM Modi said.

The Indian Army carried out surgical strikes across the LoC on the intervening night of September 28-29, 2016, and destroyed terror launch pads that were under the guard of a Pakistani post located 700 metres from the LoC.

In the well calibrated operation, the Pakistan-based terror outfit Lashker-e-Taiba (LeT) was severely hit with assessment reports of radio intercepts indicating that around 20 of its militants were killed.

The entire operation was kept a secret till the Indian Army organised a press conference to inform the media and public about it.