The “Postik” vegetarian restaurant, which recently opened in Zirakpur near Chandigarh by Jaspal Singh, is one such venture. 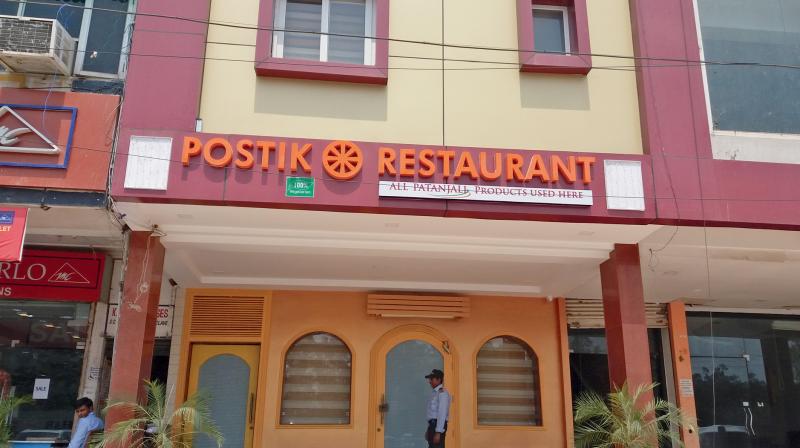 A restaurant that uses Patanjali was recently opened at Zirakpur near Chandigarh.

Chandigarh: Baba Ramdev-owned Patanjali group has not opened any restaurant in Chandigarh or anywhere, as suggested by some media reports. Patanjali has, though, expressed that they have received a proposal from Chandigarh regarding the opening of a restaurant, but so far they have not decided upon it.

However, the popularity of the group’s products has given people new business ideas.

The “Postik” vegetarian restaurant, which recently opened in Zirakpur near Chandigarh by Jaspal Singh, is one such venture. The restaurant was believed to be a franchisee of the Patanjali group, as suggested by some reports. The reports have made the small restaurant so famous, at least in the media, that it has seen more mediapersons than customers in the last few days. The publicity that Postik is a Patanjali franchise has made even the management of the restaurant jittery, who denied any link with the Patanjali group.

The restaurant, lined with saffron upholstery, plays Bhuddist chants in the background greeting the people who enter the joint.

According to chief chef Sandeep Sharma, the idea behind the restaurant is to provide healthy vegetarian food to people.

A vegetrian platter at the Postik consists of karela kabab, loki kabab, soya champ, methi kabab and panner tikka. However, with the bitterness of karela and the blandness of loki, the platter should only be tried for health benefits, not to tickle the taste buds.

For dessert, you have loki ka halwa cooked in gur, the Postik has minimised the use of sugar and used gur in most of the dishes.