The family members instead of waiting for hospital’s van driver to arrive, left with the body on its own. 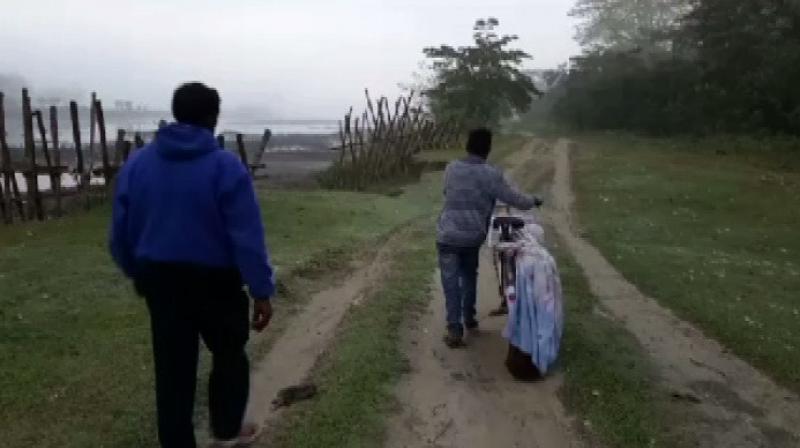 However, soon after visual was telecast by the local television channel, Assam chief minister ordered a probe and directed the health officials to rush to the spot. (Photo: Asian Age)

Guwahati: A visual from Assam of a man carrying the body of his 18-year old school going brother on a bicycle due to absence of a motorable road has triggered widespread anguish. The incident was of Majuli, the constituency represented by Assam chief minister Sarbananda Sonowal.

However, soon after visual was telecast by the local television channel, Assam chief minister ordered a probe and directed the health officials to rush to the spot.

The officials on Wednesday said that the deceased Dimplae Das hailed from Balijan village in neighbouring Lakhimpur district. The family members instead of waiting for hospital’s van driver to arrive, left with the body on its own.

“What we have found is that the patient belongs to a village that falls under Lakhimpur district. But his family members decided to bring him to the civil hospital in Garamur, which is closer. Apparently, their village Balijan does not have a motorable road link, and they have to cross a makeshift bamboo bridge to reach the main road to Garamur,” the health officials said.

Informing that the patient who had severe respiratory problem was brought on a bicycle that caused more injury to the patient, the health officials said that patient died soon after he was brought to the hospital.

Though, hospital had a hearse van, the family members left the hospital with the body on the same bicycle they brought the patient, the health officials said.

Expressing his deep concern over the incident, Mr Sonowal directed the Director, Health Services to go to Majuli and immediately and carry out an inquiry in to the incident.

In August 2016, a visual from Kalahandi of Dana Majhi, a tribal, carrying his wife’s body on his shoulders for nearly 12 km had rocked the nation, as he had no money for a hearse van.

The Majuli deputy commissioner P G Jha told reporters that they are also looking into the incident if there was any lapse on part of hospital authorities.