Compulsory quarantine for passengers coming in from foreign countries 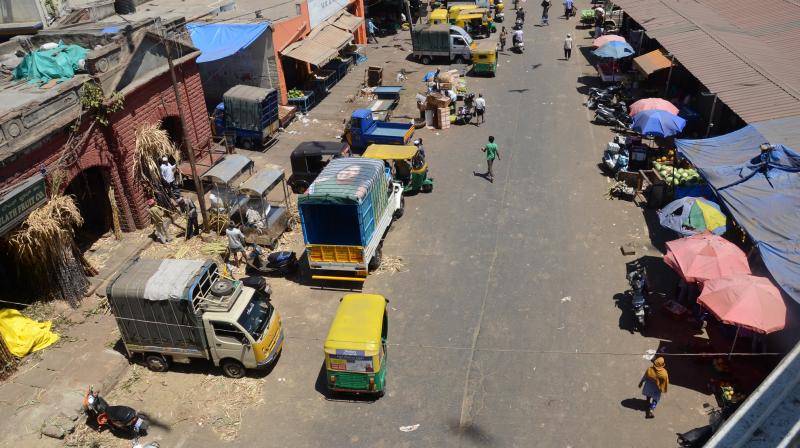 Bengaluru's normally crowded K R Market wears a deserted look due to the coronavirus restrictions in force in the city. (Photo: Satish B)

Bengaluru: The Karnataka government has extended the statewide coronavirus shutdown till March 31 as the number of positive cases rose to 14, of whom 11 are those who came in from foreign countries.

In an emergency Cabinet meeting, the state government set up a task force of four ministers to lead the defence against the virus. This core team will have Rs 200 crore to orchestrate the combat.

When chief minister B S Yediyurappa announced the shutdown last week, it was to be in force until March 21, but it was always unlikely that the Covid-19 scare would have waned by then.

Several more restrictions were announced today. Quarantine will be mandatory for all passengers arriving from foreign countries. While schools, colleges and business establishments will continue to be closed, restrictions have been extended to marriages, fairs and social functions as well.

Public entry to Vidhana Soudha, Vikas Soudha and the M.S. Building has been barred till March 31.

While setting up the task force, the government has earmarked Rs 200 crore for the coronavirus campaign. The chief minister said there is no dearth of funds for fighting the virus.

The task force will monitor coronavirus cases on a daily basis and orchestrate the response of all stakeholders. It will issue a daily bulletin on the epidemic and also run awareness campaigns.

With quarantine now mandatory for passengers coming in foreign countries, community centres, hotels, convention centres, resorts and even PGs will be rented to accommodate the new arrivals.

The compulsory quarantine will be for 15 days.

A quarantine stamp will be imprinted on the right hand of passengers coming in from foreign countries.

Since the Centre has relaxed the rules for using SDRF funds, the state government will draw from it to contain the pandemic; therefore, there will be more funds available to all districts, chief minister B S Yediyurappa said in the Assembly.

In further measures, all passengers and suspected Covid-19 cases will be tracked by their mobile phones.

“We are in the first and second stages of the epidemic. The virus is still at a primary stage and has not spread to community level," medical education minister Sudhakar said in the Assembly.

"It is important that we do not let the epidemic enter the third stage. It is possible if we implement stringent measures. People have responded positively to the state government’s measures and are cooperating with our decisions," Sudhakar said.