Recounting horrible attack, Abdul Nazer said he and Ansi were seated separately inside the mosque -- men sat on left, women on right. 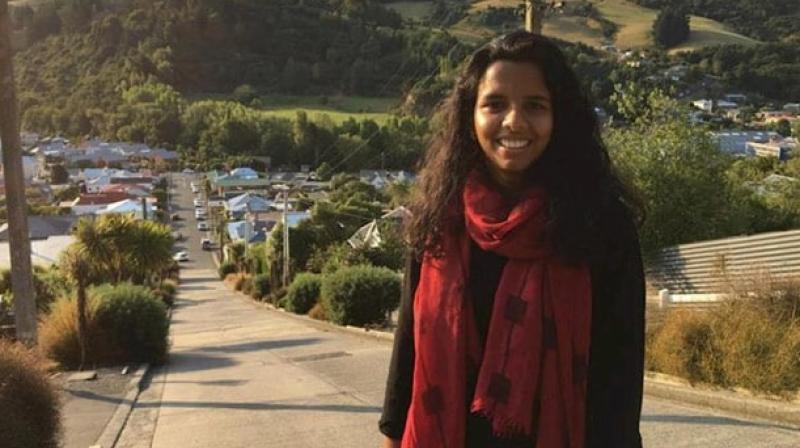 The couple borrowed some USD 48,000 to move to New Zealand from Kerala last year so that she could do a master's degree in agribusiness management, which she completed just three weeks ago. (Photo: givelittle.co.nz)

Thiruvananthapuram/Christchurch: For the Kerala couple Abdul Nazer and Ansi Alibava, life in New Zealand was peaceful and promising until Friday's mass shootings at two mosques in Christchurch that shattered their dreams.

The couple were inside the Al Noor mosque in central Christchurch when the first shots were fired by a white supremacist, in one of New Zealand's worst mass shootings, that killed 25-year-old Ansi Alibava and 49 others.

The couple borrowed some USD 48,000 to move to New Zealand from Kerala last year so that she could do a master's degree in agribusiness management, which she completed just three weeks ago.

Abdul Nazer, 34, was working at the local supermarket to help pay the bills.

When Ansi Alibava graduated, they hoped she would get a high-paying job and they would live and work in New Zealand.

Friday's mass shootings at two mosques in central Christchurch changed everything for the couple.

Recounting the horrible attack, Abdul Nazer told CNN that he and Ansi Alibava were seated separately inside the mosque -- men sat on the left, women on the right.

"Right before the main prayer, I heard a single shot firing and I thought that some kids outside might have popped a balloon," Abdul Nazer said.

Seconds later a series of staccato shots from a high-powered weapon sent 300 or so people in the mosque scrambling for the exit.

Nazer said he was close to an emergency door and escaped after someone smashed the glass. Others were not so lucky. "People started falling over me, I saw people with blood on their shirts," he said.

He ran to a neighbouring house and phoned the police for help before returning to the mosque to find his wife.

The scene that confronted him on his return to the mosque was horrifying, with bodies scattered on the street beside pools of blood.

Then he saw the motionless figure of Alibava, lying face down in the street.

"I ran towards her and then a policeman stopped me and told me to move somewhere else," he said.

It was not until Saturday night, more than 24 hours after he had fled the mosque, that New Zealand police confirmed that Alibava was one of the 50 people killed in Friday's attacks by Australian Brenton Tarrant, 28, who has been charged with murder.

Nazer's friend, George, was with him when police provided them, and other families, a list of the people confirmed dead. Until then they had clung on to the hope that perhaps Alibava was in hospital.

"We thought it might be one of those miracles that could happen," George said.

Nazer and Alibava had an arranged marriage two years ago, but friends say they have no doubt that the couple soon fell deeply in love.

According to Tali Ao, Alibava was the brightest student on her course at the Lincoln University.

"Her professors, everyone loved her," Tali Ao said.

On Monday, the university's students and staff bowed their heads on the lawn for one minute's silence in remembrance of the dead, CNN reported.

"For some of our family's victims to be attacked because of their religion is inconceivable," said Acting Chancellor Bruce Mckenzie.

Meanwhile, the Kerala community in Christchurch has rallied around Nazer to help him through the tragedy.

They have started a Givealittle page to help him pay back the huge loan they took out in India to pay for Alibava's studies in New Zealand.

Nazer wants to send his wife's body back to Kerala to be home with her mother and brother in Kodungallur in Thrissur district. Her father died several years ago.

Nazer is unsure what the future holds, but he says he knows he wants to stay in Christchurch, where he and his wife spent most of their married life together.

"She had so many dreams," he says. "No one would expect something like this would happen. There are a lot of good people here ... This shouldn't happen to any family."

The Kerala Chief Minister's Office has said that all efforts were being made to bring the mortal remains of Alibava from New Zealand.