The fodder scam involves the embezzlement of government funds in Bihar in the name of cattle fodder. 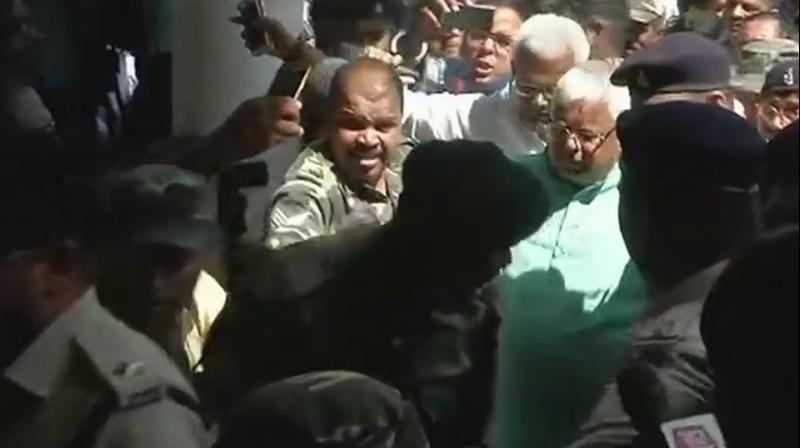 RJD Chief Lalu Yadav has gone to court straight from a hospital where he was admitted after he fell ill inside prison. (Photo: ANI)

Ranchi: Lalu Yadav has been convicted in the fourth case linked to the fodder scam while his predecessor, former deputy chief minister of Bihar Jagannath Mishra has been acquitted by a court in Jharkhand's Ranchi.

RJD Chief Lalu Yadav has gone to court straight from a hospital where he was admitted after he fell ill inside prison.

The fodder scam involves the embezzlement of government funds in Bihar in the name of cattle fodder. The multi-million-rupee scam surfaced in the 1990s when Lalu Prasad Yadav was the Chief Minister of undivided Bihar.

The court is hearing one case related to Rs 3.13 crore from the treasury of a place called Dumka, which is now in Jharkhand, between December 1995 and January 1996.

Besides Lalu Prasad and Jagannath Mishra, 30 others are accused in this case.

Lalu Prasad was convicted in the first fodder scam case in 2013 and sentenced to jail for five years.

The RJD chief was convicted by a special CBI court in a second case on December 23, 2017, and sentenced to three-and-half years in jail.

Lalu Yadav was sentenced to jail for five years after being held guilty in a third case in January, related to money swindled from the Chaibasa treasury.

He faces two more cases -- one in Ranchi and one in Patna.

The fodder scam probe was handed over to the CBI on the Patna High Court's order.

The bulk of the cases were transferred to Ranchi after Jharkhand was carved out of Bihar in 2000.