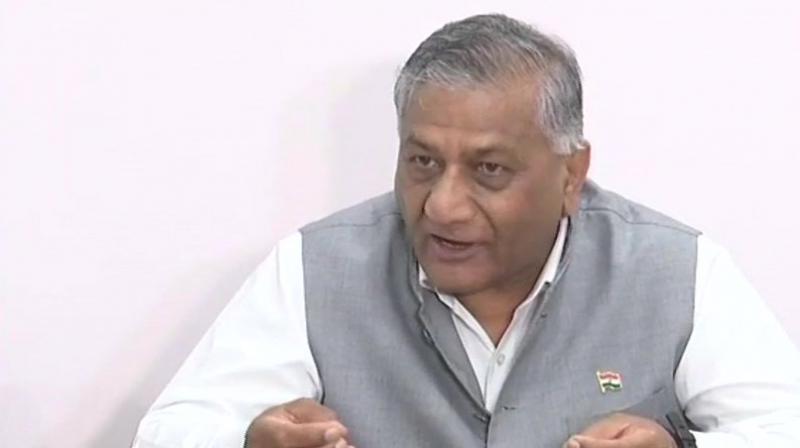 'Don't judge success or failure of a policy, based on one incident. There was an encounter, where an officer and three jawans died. This doesn't mean the situation is bad,' said Union Minister of State for External Affairs and former Army chief VK Singh. (Photo: ANI)

Shimla: Days after the Pulwama terror attack, Union Minister and former Army Chief VK Singh said that Kashmir is an issue of proxy war and the rise of terrorist activities in South Kashmir post-2012 needs an analysis.

"This very same South Kashmir was very peaceful between 2005 and 2012. What's the reason for the surge in incidents there after 2012? Have you analysed this? Why did this happen?" he said while addressing a press conference here on Monday.

Singh, the Union Minister of State for External Affairs, said, "The Kashmir issue is not simple. It's an issue of proxy war. It's an issue for which things should have been done earlier. Don't judge success or failure of a policy, based on one incident. There was an encounter, where an officer and three jawans died. This doesn't mean the situation is bad."

Talking at length about Kashmir and the problems plaguing the region, the Minister said,  “Some youth being paid to throw stones, some youth standing on the top of a vehicle and shouting 'hum kya chahte, azaadi' (what do we want, freedom) does not reflect the sentiment of the entire youth of Kashmir. A great amount (of work) is being done out there, yes more can be done."

Responding to questions on the Centre's plan of action following a dastardly terror attack in Pulwama that killed 40 CRPF soldiers on February 14 and four army personnel, including a Major. in an encounter with terrorists on February 18, Singh said, "The youth has been engaged earlier also, will be engaged in future also. There are many things required to be done in Kashmir and there are many being done. Some have succeeded, some have not. I am positive that the government is ensuring that this issue is looked at very seriously."

The Minister hinted at the rift created in the state by parties which had support either from the Valley or the Jammu region and said that it should be seen if policies were an overall failure or mistakes of a few gave a boost to terrorists.

After a nearly 20-hour fierce gun battle between terrorists and security forces in Pulwama, three Jaish-e-Mohammed operatives, four Army personnel, including a Major, and a civilian were killed on Monday.

This incident came after a CRPF convoy, moving from Jammu to Srinagar, was attacked by a suicide bomber in Pulwama’s Lethpora area on the national highway on February 14, killing 40 paramilitary soldiers.