The Oppostion RJD has announced that liquor consumption norms in the state will be relaxed if the party is elected to power. 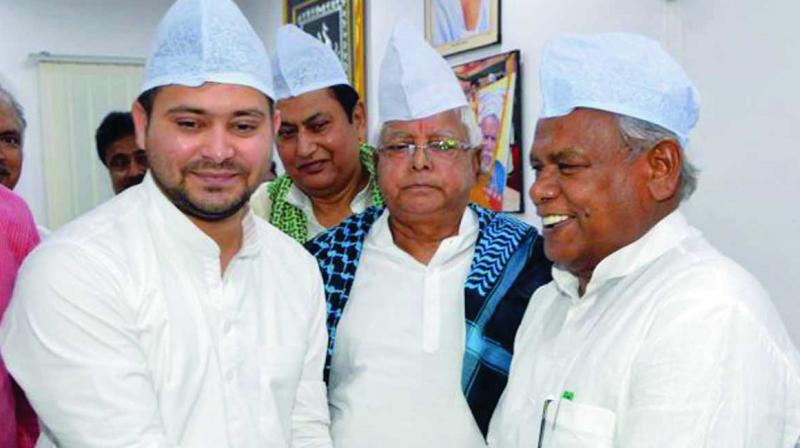 Patna: Discontent brewing over the stringent liquor prohibition law in dry Bihar has snowballed into a political battle. Opposition parties are planning to make it an election issue.

Sources claimed that anger against the ruling JD(U) is also simmering over the arrest of three undergraduate law students who had consumed liquor to celebrate their success in examination.

The Oppostion RJD has announced that liquor consumption norms in the state will be relaxed if the party is elected to power.

“Law and order in Bihar has deteriorated and common people are being targeted and sent to jail for consuming liquor. People are not happy with the current regime. I can assure that prohibition law in the state will be relaxed if our party comes to power,” RJD national vice-president Raghuvansh Prasad Singh said. The RJD began attacking chief minister Nitish Kumar on liquor policy after he returned to the NDA fold last year. Lalu Prasad Yadav and his son Tejashwi Yadav had supported the liquor prohibition act when the RJD was part of the government before July 2017.

According to the RJD, around 56,000 people have been sent to jail for various offences under the prohibition law and most of them belong to the backward and dalit communities.

The ruling JD(U), however, alleged that the RJD is opposing the prohibition law due to its leaders’ nexus with the liquor mafia.

According to JD(U) spokesperson Ajay Alok, "The RJD has been receiving funds to run the party from the liquor mafia that is the reason why they have been giving such statements. The stringent act is necessary for effective implementation of the prohibition act."

During a political event in New Delhi in December,  Nitish Kumar had pitched for a nationwide ban on liquor consumption.

Former chief minister and Hindustani Awam Morcha (HAM) chief Jitan Ram Manjhi, whose party is one of the prominent NDA constituents in Bihar, has also been highly critical of the prohibition law.

He had alleged that senior officials have been consuming liquor despite a ban and urged the state government to review its prohibition policy which was targeting mostly the dalits and poor.

"Officials in the state have easy access to liquor but only poor and dalits are being sent to jail by police and the excise department. These officials should go through breath analyser test as several of them have been enjoying their drinks despite the ban," said Mr  Manjhi recently.

A total prohibition on liquor was imposed in Bihar on April 5, 2016. Excise department report suggests that action has been initiated against 1.29 lakh violators so far.

Officials claimed that 3.87 lakh premises have been raided by police while the excise department carried out searches on another 1.96 lakh locations and seized over 14 lakh litres of Indian Made Foreign Liquor (IMFL) and 7.48 lakh litres of country-made liquor.

According to a police report, more than 90,000 cases were registered in connection with the violation of the prohibition law.

Liquor prohibition was the first announcement by Nitish Kumar after he was sworn in as chief minister following an emphatic election victory in 2015.

It was a promise he had made to a group of women who complained about liquor addiction in rural areas.

A complete ban on liquor was imposed on April 5, 2016, but the stringent excise law was brought into force in October 2016 after the Patna high court quashed the previous prohibition act.

Consumption of booze and dealing or conniving to sell liquor is a criminal offence under the Bihar Prohibition and Excise Act, 2016 which provides for imprisonment up to 10 years and a fine of more than Rs 1 lakh.