In Kolkata’s Park Circus Maidan, about 60 Muslim women continued their sit-in demonstration for the 12th on Saturday. 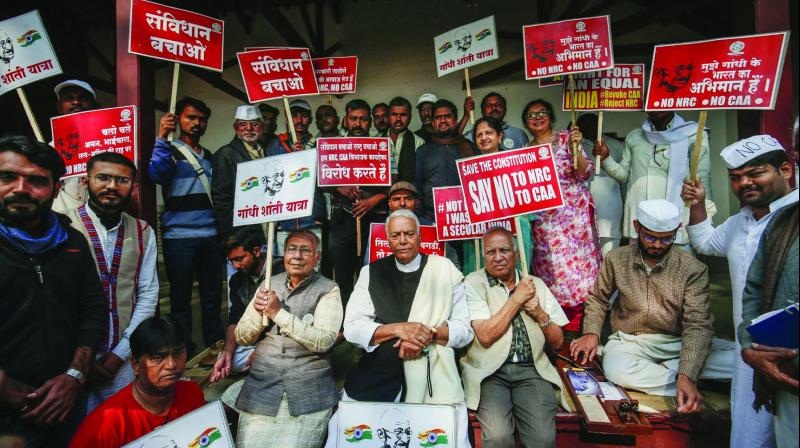 BJP leader and former Union minister Yashwant Sinha (centre) with former Gujarat CM Suresh Mehta (left) and others leaders at a sit-in protest against the Citizenship Amendment Act and National Register of Citizens (NRC) during his ‘Gandhi Shanti Yatra’ in Ahmedabad on Saturday. (Photo: PTI)

New Delhi: Peaceful but robust demonstrations, marches and dharnas against the Citizenship (Amendment) Act, National Register of Citizens (NRC) and the National Population Register (NPR) continued in several parts of the country on Saturday, making it the 38th consecutive day of protest since the Rajya Sabha passed the controversial Act.

In Delhi’s Shaheen Bagh, women who have been sitting in protest refused to vacate the road 13-A (which links Delhi with Haryana and UP) despite requests from Delhi Police. The women who have been protesting since December 15 against the CAA, and the proposed nationwide NRC following police’s attack on Jamia Milia Islamia students, however, told the police that they will make space for traffic to avoid inconvenience to people.

In Kolkata’s Park Circus Maidan, about 60 Muslim women continued their sit-in demonstration for the 12th on Saturday. The sit-in by the women, ranging from homemakers to professionals, is on the lines of the Shaheen Bagh protest in Delhi. One of the protestors, Nauseen Baba Khan, a young research scholar, said: “It is a do-or-die battle. We will peacefully squat here till there is a judgment in our favour.”

Various personalities such as singer Kabir Suman, social activists Umar Khalid and Yogendra Yadav and former home minister P. Chidambaram have already visited the venue to express their support for the protesters.

In Dimapur, Nagaland, thousands of people led by students from different colleges gathered in the Supermarket to protest against the CAA. With banners and placards saying, “We stand united against CAA”, “Save Dimapur — Listen to peoples’ voice” and “CAA — Modi-Shah votebank”, people from all walks of life joined the protest rally. Khehovi V. Chophy, president of the Dimapur District Gaon Burahs (village chieftains) Association, said outsiders will not be allowed to take away the rights of indigenous people.

Former Union minister and Bharatiya Janata Party leader Yashwant Sinha, who is on “Gandhi Shanti Yatra” against the government’s political and economic policies came in support of students protesting against the CAA and NRC at Gujarat Vidyapith in Ahmedabad, Gujarat, on Saturday.

Students at this university, founded by Mahatma Gandhi, have been protesting peacefully against vice-chancellor Anamik Shah for not allowing them to fly kites with messages against the implementation of CAA and NRC on January 14.

Mr Sinha reiterated the new citizenship law is a ploy of the Narendra Modi government to divert attention of people from important issues like the “failure of economy”.

Congress leader and former home minister P. Chidambaram said in Kolkata on Saturday that after the “Assam NRC fiasco”, the Narendra Modi government has quickly “changed gears” and is now talking of NPR. Speaking with reporters, Mr Chidambaram said that NPR is “nothing but NRC in disguise”.

“Our purpose is to fight the sinister purpose of CAA and the NPR and mobilise public opinion against them. Our stated position is that we will not agree with NPR being rolled out from April 2020,” he said. The Congress leader said the issue of the constitutional validity of CAA lies with the Supreme Court.

In Jaipur, Kerala governor Arif Mohammad Khan said the amended citizenship law is a subject of the Union List and not a state subject and will have to be implemented by states.

“There is no way other than implementing the Act. It will have to be implemented under (Article) 254,” Mr Khan told reporters in response to a question on some states refusing to implement the new law. He said everyone should understand “one’s own jurisdiction”.

“You may give your arguments by using your intellect, you have the right to challenge it in the Supreme Court, but the Citizenship Act is a subject of Union List and not a state subject,” he said. Mr Khan added that people have a right to be adamant about their opinion but no right to go beyond the boundary of the law.

Meanwhile, a court in Muzaffarnagar granted bail to 14 people who were arrested in connection with violence during protests against the CAA last month. District judge Sanjay Kumar Pachori allowed their bail pleas and directed that they be released after furnishing two sureties each of Rs 1 lakh each.

According to the prosecution, the accused were arrested and sent to jail for allegedly being involved in the violence that broke out during protests against the Citizenship Amendment Act on December 20 in Kotwali police station area. The police had arrested several in connection with the incident and charged them for inciting children to pelt stones.

UP Police has registered a case against unidentified people for allegedly disseminating fake news through social media and newspapers of sexual assault of a madrassa student during police custody following the December 20 violence during the anti-CAA protests. Police said a case was registered under Section 22 of the POCSO Act against unidentified people for allegedly spreading false news pertaining to a child’s sexual assault and misusing the law.

The case was registered after a complaint was filed by a person in this regard, police said, adding that the madrassa committee has said no incident of sexual assault with any of its students took place. Around students of the Sadat Madarsa were arrested by the police following the violence but they were later granted bail by a court after the SIT probing the incidents said there was no evidence against them.