Tell us about your plans on jobs, Doklam, rapes: Rahul to Modi

Rahul Gandhi was responding to Modi’s tweet where he had invited suggestions for 2018’s first ‘Mann ki Baat’ session. 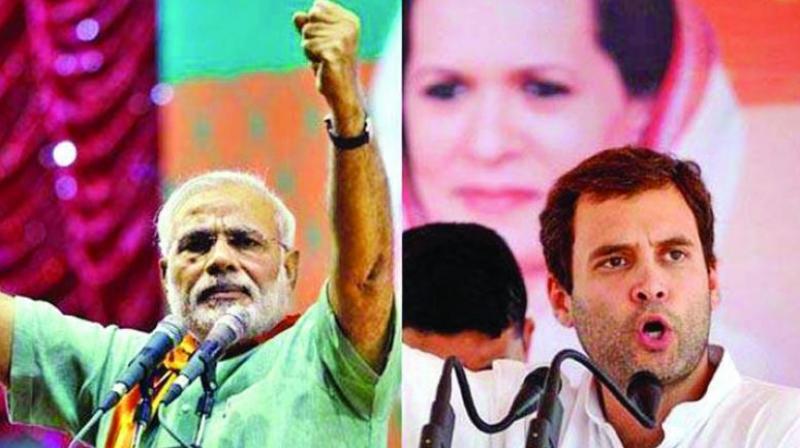 Congress president Rahul Gandhi (R) asked Prime Minister Narendra Modi (L) about his plans for getting jobs for youth, getting the Chinese out of Doklam and curb the rising incidents of rapes in Haryana. (Photo: File)

Mumbai: Day after Prime Minister Narendra Modi invited suggestions for his monthly radio programme 'Mann ki Baat', Congress president Rahul Gandhi on Friday took to twitter and asked Modi about his plans for getting jobs for youth, getting the Chinese out of Doklam, and curb the rising incidents of rapes in Haryana.

The Congress president was responding to a Prime Minister’s tweet where he had invited suggestions for 2018's first 'Mann ki Baat' session, which will be broadcast on January 28.

In November 2017, Rahul had attacked at the Centre and blamed demonetisation for destroying millions of jobs while Narendra Modi was harnessing people's anger over unemployment towards communal hatred.

In an op-ed article in Financial Times, titled "Modi's reforms have robbed India of its economic prowess", Rahul said Modi's "arbitrary" act had killed millions of livelihoods by destroying the informal labour sector and wiping out small and medium businesses.

The second suggestion by the Congress chief was aimed at reports of Chinese presence in the Doklam plateau.

On Thursday, Congress accused Modi of compromising with national security and strategic interests and said his government was "caught snoozing" when China was occupying the Doklam plateau with fresh military installations.

The third suggestion to Modi by the Rahul is on the rising number of rape cases reported from Haryana.

In the last one week, the state has reported at least six incidents of rapes, including two incidents involving minor girls.

With the mounting reports of rape in Haryana, the opposition led by the Congress had demanded the resignation of the Manohar Lal Khattar government for failing to control the law and order situation in the state.

Dear @narendramodi, since you've requested some ideas for your #MannKiBaat monologue, tell us about how you plan to:

1. Get our youth JOBS
2. Get the Chinese out of DHOKA-LAM
3. Stop the RAPES in Haryana. pic.twitter.com/pwexqxKrTQ