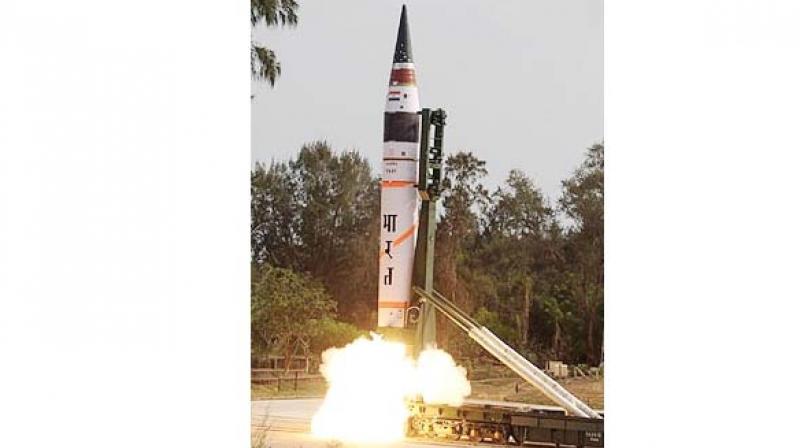 A file photograph of Agni-V

Balasore: India on Thursday successfully test-fired its nuclear-capable surface-to-surface Agni-V ballistic missile from a test range off the Odisha coast.

The most-advanced missile of the Agni series has a strike range of over 5,000 km, which brings China as well parts of Europe and Africa within its nuclear strike reach.

Described as “a weapon of peace,” Agni-V is a “fire-and-forget” system that cannot be easily detected by the enemies as it follows a ballistic trajectory, say experts.

The accuracy level of the missile is far higher than three earlier variants — Agni-II, Agni-III and Agni-IV.

Developed by the Defe-nce Research and Develo-pment Organisation (DRDO), Agni-V, is capable of carrying nuclear or traditional warhead of about 1.5 tonnes. The three-stage, 17.5-metre tall and two-metre wide Agni-V weighs around 50 tonnes. It was fired from a canister launcher, mounted on a mobile platform, at about 9.53 am the Integrated Test Range in Abdul Kalam Island, defence sources said.

While India already has in its arsenal Agni-I, II, III and IV missiles and supersonic cruise missiles like Brahmos, Agni-V will be inducted into the defence system after a few more successful trial tests. Developed under the Integrated Guided Missile Development Programme, the Agni series missiles such as Agni-1 (700-km range), Agni-2 (2,000 km range) Agni-3 (2,500 km range) and Agni-4 (3,500 km) have added considerably to the country’s military strength.

Agni-6 is reported to be in development stages. The missile will have the capability to be launched from submarines as well as from land, with a strike-range of 8,000-10,000 km.