Speaker Kavendra Gupta agreed, but he said that conducive atmosphere should be created for their ‘safe return’. 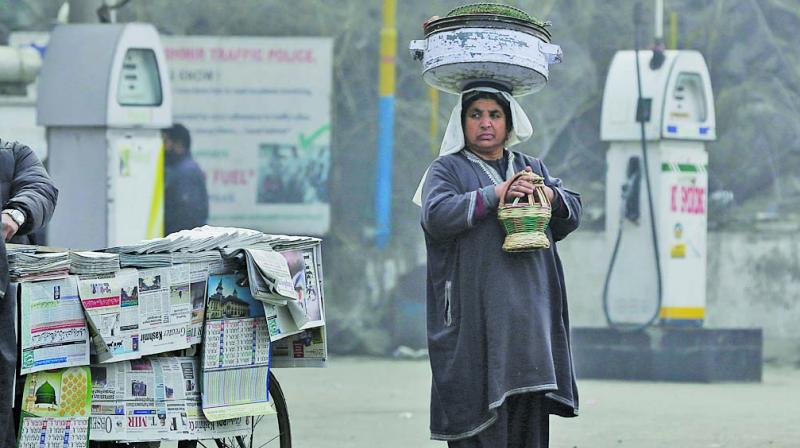 A Kashmiri fisherwoman warms herself on a fire-pot in Srinagar. (Photo: AP/File)

Srinagar: Jammu and Kashmir Assembly on Thursday passed a resolution seeking return of the displaced Kashmiri Pandits and members of other communities, uprooted in the aftermath of the outbreak of insurgency in 1989-90, to the Valley.

The resolution was moved in the House, currently in its budget session in winter capital Jammu, by former Chief Minister and Opposition National Conference (NC) working president, Omar Abdullah.

“Besides Kashmiri Pandits, people from other communities including Sikhs who also migrated from the Valley due to the turmoil that hit it should return. This House should pass a resolution so that all those people return to Kashmir,” Abdullah said.

Speaker Kavendra Gupta agreed, but he said that conducive atmosphere should be created for their “safe return”.

Responding to Abdullah’s demand, Minister for Public Works and Parliamentary Affairs, Abdur Rehman Veeri, said: “They (Kashmiri Pandits and others) are our part and bringing them back is what keeps our conscience alive. We accept the need to bring our people who left back and thus a resolution is being passed here.”

Majority of the Valley’s minority Hindu Brahmins, referred to as Pandits, fled their homes after the demand for ‘aazadi’ burst into a major violence towards the end of 1989. Some families of Sikhs and Muslims also migrated from the Valley.

However, Sanjay K. Tickoo, president of Kashmiri Pandit Sangarsh Samiti (KPSS) that represents a few thousand Pandits who stayed put when majority of the community fled the Valley in 1990, disputes the official figures. He says as many as 75,343 families (367,289 people) opted for migration.

Abdullah, while speaking in the House, said, “Today it has been 27 years since they (Kashmiri Pandits and some Sikh and Muslim families) left the Valley and we should rise above politics and pass a resolution in the House for their comeback.”

Independent MLA and leader of regional Awami Itehad Party (AIP), Sheikh Abdur Rashid, however, accused Abdullah of trying to appease the Pandits. While opposing the resolution, he said that since no Kashmiri (Muslim) is opposed to return of Pandits there was no need to pass a resolution.

If Abdullah or Chief Minister Mehbooba Mufti is really so concerned about return of migrants, they should also speak about thousands of families that were “forced” to migrate to other side of the Line of Control (LoC) from Keran, Karnah, Uri, Poonch, Gurez and other areas along the frontier to escape the security forces’ “atrocities’.

He lashed out at Abdullah for “forgetting about the fate of the resolution passed by the House for the restoration of autonomy”. “Just passing resolutions is of no use unless government shows the required maturity, sincerity, seriousness, practicality and commitment over serious issues,” he said.

He also said, “It was a known fact that Kashmiri Pandits do visit the Valley on and off and as such it is their choice when they decide to settle permanently at their ancestral places. The resolution is nothing but an act of appeasement to Kashmiri Pandits and to give a notion that the issue of return of migrant Pandits is the only burning issue” (sic).

The state’s education minister and government spokesperson, Naeem Akhter, said that Kashmiri Muslims need Pandits more than Pandits need Kashmiri Muslims. “There is ethnic imbalance in the place where only one type of people live. Migration was a horrific part in the history,” he told reporters outside the House. He added that there was instantaneous need for the return of Kashmiri Pandits “otherwise it can be the end of a civilization.” He echoed the thoughts of Mufti, her predecessor Abdullah and host of other Kashmiri politicians that ‘Kashmir is incomplete without Pandits’ and they will have to return. “Pandits need to be made part of economic stake and development as it will help bringing them back,” he added.

When asked how can ‘civilization be settled in separate colonies’ planned by the government for the Pandits in the Valley, Akhter said “such confusions are a media creation.”

The Jammu and Kashmir government had early last year identified seven places in number of districts of the Valley to set up separate clusters for displaced Kashmiri Pandits and soon started work despite stiff opposition from separatists and even a few mainstream political parties.

Also, some Pandit outfits and activists publicly voiced their concern over the preference of the PDP-BJP government as they believed it would only add to bitterness and widen the gap between the Valley’s minority and majority populations.

Amid the hullaballo, Key separatist leaders had announced to set up a committee to hold discussions with Pandit representatives on the issue and asked them why they can’t return to their original places of residence and live side by side with their old Muslim neighbours.

However, the unrest triggered by the killing of popular militant commander Burhan Wani on July 8, seen as worst law and order situation witnessed in Kashmir in decades, paralysed the government and enfeebled political system in the scenic Valley and, in its impact, the numbness caused to the administration forced the government to put many ventures on hold.