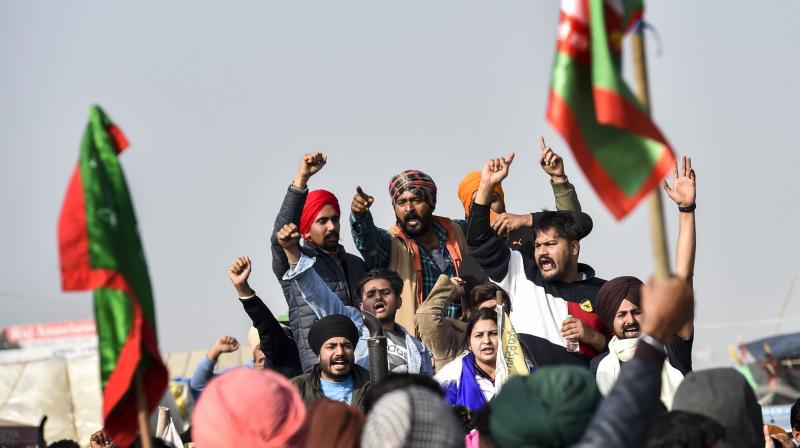 Farmers shout slogans during their protest against the new farm laws, at Singhu Border in New Delhi, Thursday, Dec. 17, 2020. (PTI)

New Delhi: Acknowledging the right of farmers to hold non-violent protests, the Supreme Court on Thursday suggested that the Centre put on hold the implementation of its new agricultural laws, putting forward the idea of setting up an impartial and independent committee to end the impasse. The Centre said the farmers would not come forward for negotiations if the implementation of the farm laws was put on hold.

The Centre told the court it was not possible to hold the implementation of the laws. While solicitor-general Tushar Mehta said it couldn’t be done, attorney-general K.K. Venugopal said he would come with the response of the government on the proposition.

Chief Justice S.A. Bobde asked Mr Venugopal to give an assurance that the laws will not be implemented in the interim period “till we hear the matter”. The A-G, however, said this could stall the negotiations. To this, the CJI said a statement to this effect by the Centre could only enable the discussions with the protesting farmers and resolve the standoff.

Mr Venugopal then asked for time to discuss it with government officials and come back during the vacation, when the CJI indicated a bench will be set up to hear the matter even during the winter break. Friday is the last working day for the court before its 15-day winter recess, that ends on January 3.

The Supreme Court also refused to order eviction of farmers from Delhi’s borders, where they are camping for 22 days, without hearing them. The court said farmers have the right to protest, but without inconveniencing other people.

The farmers’ unions remained adamant on their demand that the laws must be withdrawn first. Agreeing with the court that the issue must be resolved soon, Bharatiya Kisan Union spokesman Rakesh Tikait said the future course of action will be decided after discussions with panchayat leaders. They noted that the protesters had not blocked roads, it was the police that had put up the barricades.

The ongoing protests have already cost the lives of 22 farmers, including several women. Eight victims died due to accidents while returning home, 12 due to heart attacks, three due to cold and a Sikh priest killed himself in protest against the farm laws.

The latest victim was a Punjab farmer protesting near the Delhi-Haryana border who died Thursday morning, allegedly because of the bitter cold. The 38-year-old man, a father of three, was found dead at a site where thousands of farmers have been protesting for 22 days.

Delhi CM Arvind Kejriwal criticised the Centre over the death of farmers, asking how many sacrifices they will have to make to get their voices heard, as he tore up copies of the Centre’s three farm laws in the Delhi Assembly, which passed a resolution seeking their repeal. “I am pained I have to do this. I did not intend to, but I cannot betray the farmers of my country who have been sleeping on the streets in the cold when the temperature is just 2 degrees Celsius,” Mr Kejriwal said.

Union minister Hardeep Puri said the government was willing to sit with the protesting farmers. He said: “It pains me many people sitting in protest probably are not aware of what they are protesting against… The government is still sending a message to all farmers that please come and talk.”

In the Supreme Court, as the solicitor-general insisted it was not possible to put the new farm laws on hold, an irked CJI said: “Don’t pre-empt it. A-G says he will discuss. We are not staying the law. But you can just say that no action will be taken in the meanwhile.”

The Centre, meanwhile, expressed its hesitation about the CJI’s option of setting up a committee of neutral and independent people with expertise in agriculture to hear both the farmers and the government to suggest a way forward. Mr Mehta said the talks between the government and the agitating farmers should take place in the presence of neutral and eminent people to ensure reasonability in the positions of both sides.

At one stage the CJI suggested the name of P. Sainath, a Magsaysay Award-winning journalist focusing on social inequalities, as a member of the proposed committee.

The petitioners said in court that roads were blocked by protesters and border points closed, affecting vehicular traffic. This, they said, was causing hardship to people, including Covid-19 patients, preventing them from accessing emergency medical services. The Centre argued that the blockade at the Delhi borders will have to be lifted as “it affects the right to movement and the damage is enormous”.

Appearing for the Punjab government, senior advocate and Congress leader P. Chidambaram said the farmers were not blocking the borders and only wanted to come to Delhi to protest within the limits of the law. The CJI said the court cannot predict which mob can turn violent and it was the police’s job. “We can’t jeopardise someone’s life or property,” he said. “This is not a mob, this is a large group of farmers,” Mr Chidambaram protested. To this, the CJI said: “We are not calling them a mob.”

The protests, now in their third week, have seen thousands of farmers, mainly from Punjab and Haryana, at Delhi’s doorstep. The three-judge bench, which included Justices A.S. Bopanna and V. Ramasubramanian, said it would order serving of notices to the protesting farmers’ unions, and give them the liberty to approach the vacation bench.