The Delhi BJP has also been slamming AAP and its leaders for incidents of violence and arson in Jamia Millia Islamia and Seelampur. 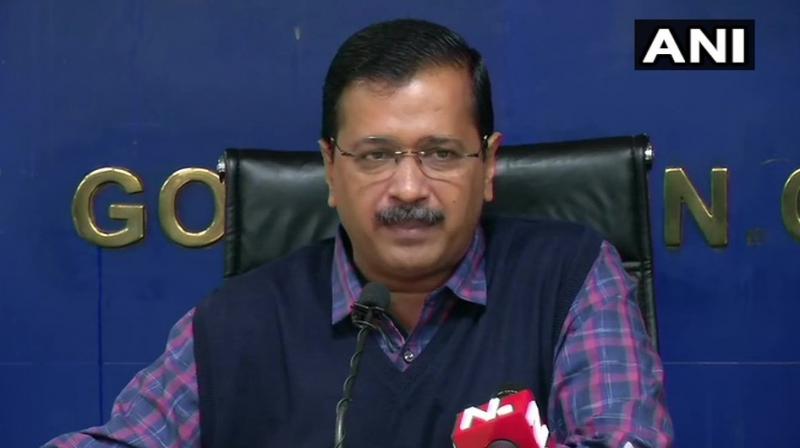 'It is being speculated that the AAP could win 65-70 seats. When it is proved that the AAP is going to win Delhi elections with a huge majority, the opposition is deliberately spreading violence, fearing a massive defeat,' Kejriwal alleged. (Photo: Twitter | ANI)

Referring to incidents of violence and arson in Delhi, Kejriwal said in a press briefing that people should understand who is behind the 'riots' and teach them lesson this time, just like in the 2015 Assembly elections.

The Delhi BJP has been slamming the AAP and its leaders for incidents of violence and arson in Jamia Millia Islamia and Seelampur and accused Deputy Chief Minister Manish Sisodia and MLA Amanatullah Khan of 'inciting' people.

"It is being speculated that the AAP could win 65-70 seats. When it is proved that the AAP is going to win Delhi elections with a huge majority, the opposition is deliberately spreading violence, fearing a massive defeat," Kejriwal alleged.

"I do not need to tell who has the power to cause riots in the country," he said.

Parrying questions on Sisodia's tweet hinting role of police in arson and Khan's alleged 'provocative' speech during a protest in Shaheen Bagh area, the chief minister said, "The opposition which is levelling allegations knows who is causing violence and arson. It's apparent that the AAP is not going to benefit from it, instead the party will be harmed. The opposition hopes it will benefit them."

Ahead of the Assembly elections scheduled early next year, the ruling AAP and the opposition BJP and the Congress are involved in an intense war of words and blame game over various issues.

The chief minister claimed that even during the last Assembly polls, attempts were made to spread violence in Bawana and Trilokpuri, and similar activities were going on again to 'spoil' peace and harmony in Delhi.

"Peace must be maintained in Delhi at any cost. Every day there are statements from the opposition blaming AAP for the violence. Why would AAP do it? What benefit will it reap doing so?

"The whole country knows who is capable of causing riots," Kejriwal said.

Holding protest was everyone's right but the boundaries of the Constitution should be honoured and agitations must be non-violent, the chief minister said, adding no one can be allowed to resort to violence.