The result declares BJP victorious amidst 337 candidates that had contested for 68 Assembly seats in the hill state. 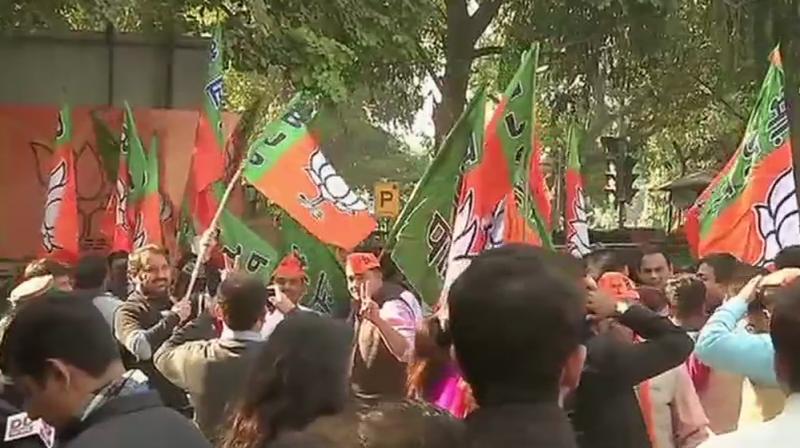 On November 9, Himachal recorded a turnout of 75.28 per cent after the north Indian state went to poll. (Photo: ANI)

Shimla: The Bharatiya Janata Party (BJP) bowled out the Congress from Himachal Pradesh making its way in the hill state after five years.

Himachal Pradesh alternates its government by voting BJP to power in the recently concluded Assembly elections in the state.

Though the saffron wave is back in Himachal, BJP chief ministerial candidate, Prem Kumar Dhumal lost to Congress' Rajinder Rana in Sujanpur. Dhumal was nominated for the designation only nine days before the polling.

“Personal loss is not of much importance. The gain that victory has brought to state BJP is important. Thankful to people of the state for voting for BJP. In politics, sometimes one wins, sometimes one loses. I was not expecting to lose, I will do an analysis,” Dhumal said.

Meanwhile, Congress leader and the present Chief Minister of Himachal Pradesh, Virbhadra Singh accepted the outcome taking full responsibility of their performance in the polls.

"I accept the victory of BJP. I, being the CM, take full responsibility of our performance here. I hope Vikramaditya (Singh) keeps winning in future, like he won today," Singh said.

The BJP was leading in 28 out of 68 constituencies, while the Congress managed to bag 16 seats.

In 2012, the Congress had defeated BJP under the leadership of Virbhadra Singh with an outright majority of 36 seats; BJP lagged behind with a paltry 26 seats and its breakaway faction Himachal Lokhit Party (HLP) won a single seat.

For any of the political parties contesting from the north Indian state, a minimum of 35 seats out of the total 68, will help it ensure a clear win.

The hill state of Himachal Pradesh has followed its long tradition of anti-establishment and has ousted the Congress party to bring back the Bharatiya Janata Party to power. The alternating tussle of power continues since 1993 on lines contrary to the divisive societal tendencies that underline Gujarat Assembly polls.

The small north Indian state with a high literacy-rate is greatly concerned about issues of development, livelihood, and other issues of governance. People here don’t quite function on factors like caste discrimination.

Dhumal whose name was revealed as the BJP's face almost at the last minute manages to have an edge over Congress contender Singh because of his overarching influence. While J P Nadda failed to be the man of the moment on behalf of the saffron party, due to his inability in enticing crowds at rallies, Dhumal brought life into the campaigning by knitting loose ends together. Prem Kumar Dhumal succeeded in bringing together members of the party who were at loggerheads over ticket allocations.

On the contrary, Congress in Himachal continued to remain a house of many factions. Ties between the Himachal Pradesh CM and Congress organisational head Thakur Sukhwinder Singh were strained. The gulf between two senior party leaders became evident when Singh intentionally neglected areas under Thakur Sukhwinder during his poll campaigns.

Anti-incumbency also played a significant role in the hill state’s politics. People have voted against and overthrown governments every five years on grounds of corruption, unemployment, demands of masses, infrastructural development and crime for over thirty years now.

The killing of a forest guard in Karsog and Gudia in Kotkhai led to huge public angst while the government rendered itself incapable of apprehending culprits.

Lack of improvement in health sector, poor roads, insufficient water supply and circumstantial caste equations are threats that might have affected the Congress regime from a ‘bottom-up’ approach.

The routine change in selection of authority can thus be attributed to the failure of any government in power at a given time.

On November 9, Himachal recorded a turnout of 75.28 per cent after the north Indian state went to poll; the statistic clearly indicates at the fervour amidst electorates.

The counting of votes began at 8 am on Monday.

Though the early trends showed a close fight between the two parties, the margin widened with further counting results.

The result declares BJP victorious amidst 337 candidates that had contested for 68 Assembly seats in the hill state.

On November 9, Himachal recorded a turnout of 75.28 per cent after the north Indian state went to poll.

A day prior to the counting of votes in Himachal, Virbhadra Singh mocked the BJP for "dreaming" to win over 50 seats.

"I am waiting for the results. I am expecting that Congress party will get victory. BJP is targeting above 50 or 60 seats of total 68. This is just a dream. Let them dream. Nobody is stopping them," Singh said.

While Congress lashed out at BJP over the issues of GST and demonetisation during campaigning, the latter trained its guns at the opposition party focusing on 'corruption.'

The saffron party has vowed to rescue the hill state from Virbhadra government's "mafia rule". It has assured people to work toward the safety of women.